Carson Wentz returned to Indianapolis Colts practice on Thursday after being activated from the reserve/COVID-19 list but remained non-committal about getting vaccinated.

Wentz, center Ryan Kelly and wide receiver Zach Pascal had to spend five days away from the team under NFL protocols because they are unvaccinated and came into close contact with a Colts staffer who tested positive.

The absence was especially unwelcome for Wentz, who missed three weeks of training camp after having foot surgery to address an injury suffered in practice on July 29.

The 28-year-old quarterback took most of the first-team snaps in Thursday’s practice, the team’s last workout before reconvening on Monday ahead of their September 12 opener against the Seattle Seahawks.

“I was frustrated, just like the other guys,” Wentz told reporters. “Nobody wants to be out, especially when you’re coming in here every day testing negative. I want to be out there, and I’m at home watching meetings from my office and all those things.

“It was frustrating, but I used the time to still get better with my foot, to stay locked in and watch some extra film. I was really excited to get back out there, finally.”

Per NFL protocols, if Wentz and the others had been vaccinated, they would have had to sit out only if they also tested positive.

Most of the questions directed to Wentz were about his vaccination status, and he repeatedly called it a “personal decision” and an “ongoing process”.

“This has been a fluid process for me this whole time,” he said. “As a family, we’ve just been kind of monitoring everything we can, letting it play out as long as we can.

“I’m not going to act like I’m an expert on a vaccine or a virus, so that’s just where we’re at.”

His remarks came a day after Colts general manager Chris Ballard said he “absolutely” believes everyone on the team should be vaccinated.

Wentz said that although Ballard and head coach Frank Reich have advocated for the vaccine, they have not pressured anyone.

“They’ve been great,” Wentz said. “We’re all smart. Competitively, of course they all want everyone to get it, and I respect the heck out of both of those guys for trusting me, bringing me in here, all of those things, but it’s been a very healthy [conversation].

“We know what’s at stake. We know as a team where we want to go, and we do know some of these things can hinder if we let them.

“That’s why we’ve got to do everything we can to not let it be a distraction and be on top of the protocol.” 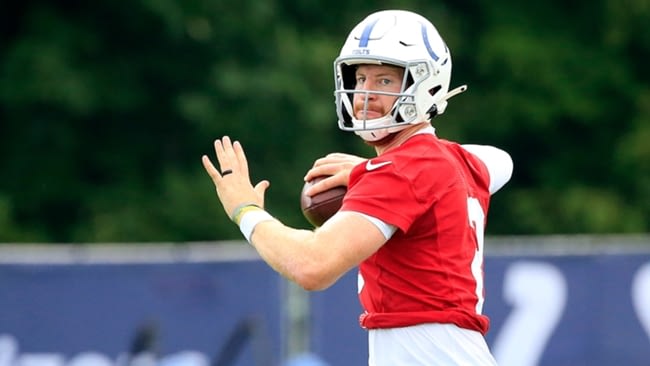