Miguel Angel Lopez sealed a first stage victory of the 2021 Vuelta a Espana for Movistar as Primoz Roglic came second to increase his lead in the general classification.

The demanding 18th stage concluded with a 14.6-kilometre climb – and it was with roughly with four to go that Lopez made his move.

With a group of the world’s best riders not far behind and primed to take advantage should he ultimately come up short, the Colombian knew he would likely need to maintain his aggression all the way to the finish.

And despite the chasing pack edging a little closer in the latter stages, Lopez did enough to cross the line up in the clouds at the summit finish on Altu d’El Gamoniteiru, ending up 14 seconds clear.

Missing out on first place will have been of little concern for Roglic, however, as the two-time Vuelta winner added another few seconds to his overall advantage over Lopez’s Movistar team-mate Enric Mas as he enjoyed a strong conclusion to the last major climb of the race.

Despite finishing well, Roglic stressed just how difficult Thursday’s outing was after a superb effort when winning stage 17, while he was happy to be done with the high mountains at the Vuelta for 2021.

“It felt like a queen stage, it was really hard, especially after yesterday’s effort,” he said. “It was extremely hard for me and I’m happy that I had something left to climb this mountain.

“We were off duty [with Bahrain Victorious and Movistar Team pulling the peloton]. In my opinion, we could have gone easier! It was a hard pace and a hard day from start to finish.

“I’m happy we’re done with the big mountains. We’re all feeling the efforts from the last two days and the three weeks before.

“Still there are hard stages to come. Hopefully, we can do our best and finish it off.”

King of the Mountains

Friday’s 191.2km route from Tapia to Monforte de Lemos could be decisive. Considered “hilly” rather than mountainous, the peloton is likely to be tired after the exploits of Thursday, meaning opportunities for breakaways should be presented. 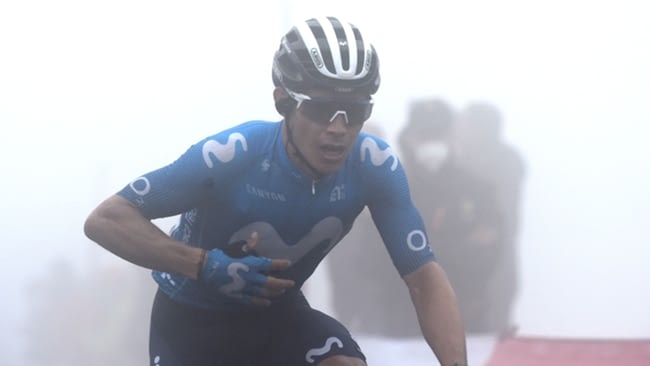