Max Verstappen celebrates with the Dutch flag at Zandvoort
Max Verstappen revelled in living up to the hype after becoming the first home winner of the Dutch Grand Prix.

On a fine weekend for the Red Bull superstar, Verstappen reclaimed the Formula One world championship lead from Lewis Hamilton as he made history at Zandvoort.

Already one of only two Benelux drivers to triumph in the region, the Dutchman coasted to victory to celebrate in front of a euphoric orange-clad crowd.

“I’ve never seen a reaction like that in all my career, to any driver,” Red Bull team principal Christian Horner told Sky Sports.

Verstappen, who passed 1,000 laps leading in his F1 career en route to finishing 20.932 seconds clear of Hamilton, said over the cheers of his noisy supporters: “As you can hear already, it is just incredible.

“The expectations were high going into the weekend and it’s never easy to fulfil that, but I’m so happy to win here, to take the lead as well in the championship.

This was Verstappen’s seventh victory of the year – all of which have come in Europe, where he had only five prior triumphs.

“It’s definitely a very good day,” he said. “The start was very important – I think we did that well.

“Then, of course, Mercedes tried to make it difficult for us, but we countered them all the time really well. We can be really pleased with the whole team performance today.”

Hamilton pitted three times in all, eventually settling for the fastest lap as Mercedes’ strategy failed to make up the deficit to a faster Red Bull car.

The Silver Arrows’ premier driver was one of just three men on the grid born when F1 last visited Zandvoort in 1985.

It now becomes only the fifth circuit Hamilton has raced at in F1 without winning, but he enjoyed the experience.

“What a race, what a crowd. Honestly, it’s been an amazing weekend,” Hamilton said.

“Max did an incredible job, so congratulations to him. I gave it absolutely everything today, flat out, pushed as hard as I could, but they were just too quick for us.” 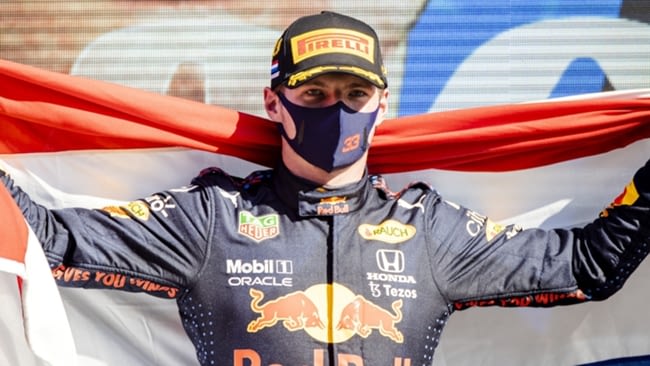