Williams driver Russell has been tipped to take Bottas’ seat, with Silver Arrows boss Toto Wolff having revealed his desire to finalise his driver line-up for 2022 this month.

Russell stepped in for Hamilton at the Sakhir Grand Prix last year after the seven-time Formula One world champion tested positive for coronavirus.

The 23-year-old also conducted a Pirelli tyre test for Mercedes ahead of the mid-season break and Verstappen thinks his arrival would keep his fellow Brit Hamilton on his toes.

“If he joins then for sure he will make it very difficult for Lewis,” Verstappen, who trails Hamilton by three points in the battle for the title, said ahead of the Dutch Grand Prix this weekend.

“He jumped into the car in Bahrain and basically from lap one he was making it very difficult for Valtteri, so you can only imagine the more experience you gain in that car and the more you get accustomed within the team, naturally you’re going to get faster.

“When you do your first race you’re guided by the team about setup direction because you just don’t know what to do really, initially, with the car.

“I remember my first race at Red Bull, the thing I said was is that we will just follow a bit what Daniel [Ricciardo] is doing because I have no clue about what this car needs to go quick because even though F1 cars look pretty similar, the way of setting them up can be very different.

“I am very confident – already what you could see with the performance he did in Spa was really good.

“Of course, they set up the car a bit more for wet conditions but nevertheless to do that in a Williams was very impressive. I do expect him to do very well if he gets that seat.”

“I have actually been team-mates with George for a year in karting and I think what I have seen of him since that time, is just that he is extremely talented,” he said.

“Every time he gets into the car he’s just quick straightaway, so his talent makes him special.

“If he goes to Mercedes next year, and I hope he does because I think he deserves a chance there, I’m pretty sure he will perform very, very well and impress more than one person.” 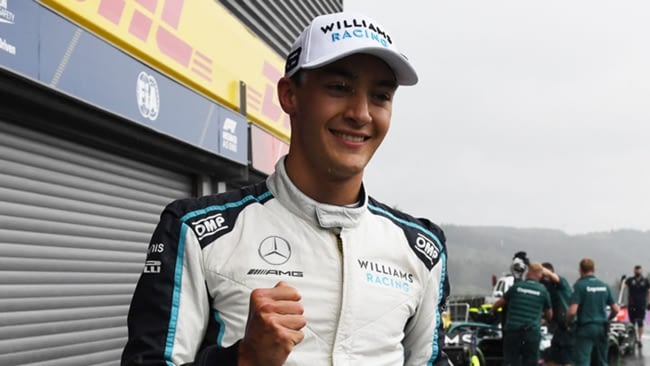