Argentina maintained their unbeaten start to CONMEBOL World Cup qualifying with a 3-1 victory over 10-man Venezuela.

Lionel Messi and Argentina were playing for the first time since their drought-ending Copa America triumph on July 10 – La Albiceleste upstaged rivals Brazil for their first title since 1993.

Lautaro Martinez, Joaquin Correa and Angel Correa were on target for Argentina on Thursday, guiding Lionel Scaloni’s side to their fourth win in seven qualifiers on the road to Qatar 2022.

Venezuela played with 10 men from the 32nd minute after substitute Luis Martinez was sent off for a horror challenge on Messi and Argentina made the most of their numerical advantage – Lautaro Martinez breaking the deadlock in the second minute of first-half stoppage time before Joaquin Correa and Angel Correa completed the scoring in second period.

Yeferson Soteldo converted a 94th-minute penalty but it was a mere consolation for hosts Venezuela.

Argentina are second in the South American standings, provisionally three points off the pace, with Brazil in action against Chile, after extending their unbeaten streak to 21 matches.

Messi’s miscued shot found the feet of Angel Di Maria in the 14th minute, but he was unable to clear his feet in time as his scooped effort was dealt with by Venezuela goalkeeper Wuilker Farinez, while Rodrigo De Paul hit the crossbar.

Di Maria found himself in space seven minutes later after Jose Velazquez slipped and had to be withdrawn due to injury, however the Argentina winger wasted the opportunity, his outside-of-the-boot pass overhit and out of Lautaro Martinez’s reach at the back post.

The complexion of the match changed approaching the half-hour mark when Luis Martinez – who replaced Velazquez seven minutes earlier – was sent off.

Messi went to ground after receiving a high foot to the shin and the challenge, initially a yellow card, was upgraded to red after the referee consulted the pitch-side monitor following a VAR review.

Argentina – who enjoyed 82 per cent possession after Luis Martinez’s dismissal – opened the scoring on the stroke of half-time with Lautaro Martinez tucking the ball past Farinez, having been played through by Giovani Lo Celso.

But Venezuela’s hopes of a point were dashed when substitutes Joaquin Correa and Angel Correa struck within three minutes – the 71st and 74th minute – to put the result beyond doubt, though Soteldo’s last-gasp spot-kick gave the home crowd something to celebrate.

What does it mean?

After their memorable Copa success, Argentina continued where they left off on Thursday. Scaloni’s men have not lost since July 2019 as they continue to build towards next year’s World Cup.

Argentina forward Lautaro Martinez scored his third goal of the 2022 World Cup qualifying campaign. All of his goals have come away from home, with the South American giants winning all three of those games.

It was always going to be tough playing with a man less against Argentina. Now, Venezuela have gone seven matches without a win. Not since November 2020 have Venezuela celebrated a victory.

Next up for Argentina is a mouth-watering Copa America final rematch against Brazil in a top-of-the-table clash in Sao Paulo on Sunday, while Venezuela travel to Peru on the same da 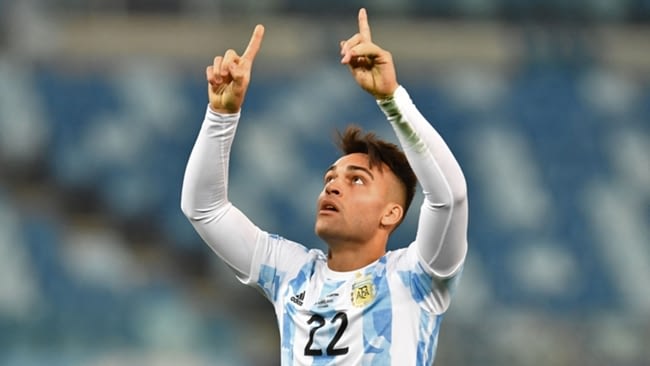