World No1 Ash Barty was relieved but happy with her response after surviving a first-round scare against Vera Zvonareva at the US Open.

Barty, the top seed back at Flushing Meadows after skipping the 2020 event due to the coronavirus pandemic, booked her spot in the second round with a 6-1 7-6 victory but the Wimbledon champion endured a challenging opener in New York on Tuesday.

Despite firing down 11 aces to improve her WTA Tour-leading tally to 300 in 2021, and hitting 31 winners, veteran Zvonareva was a tricky first-up opponent for Australian star Barty.

A US Open and Wimbledon runner-up in 2010, Zvonareva made life difficult for Barty in the second set, earning a chance to force a decider but the 36-year-old was unable to capitalise at 7-6 in the tie-break.

“She’s an experienced campaigner. She knows how to get herself into matches. I think all in all, adapting to conditions was a little bit slower than I probably would have liked [but] we’re through. We have another chance to improve on that in the next round.

“I think when my back was against the wall late in that buster, I came up with some really good stuff. That’s all we can ask is when your back is against the wall, you trust yourself, you go out there and pick your spots and hit them.”

Two-time grand slam champion Barty – fresh off winning in Cincinnati as Clara Tauson awaits in round two – added: “It obviously got really tense in that second set – tight – and in the bigger moments I was able to be aggressive and trust myself and that was a massive thing today.

“There were a couple of games where I had lapses in concentration but I was able to come through in straight sets and now we go back to the drawing board, work on a few things and we’ll be as happy as Larry.

“I’m certainly happy to be through and playing again here in New York.” 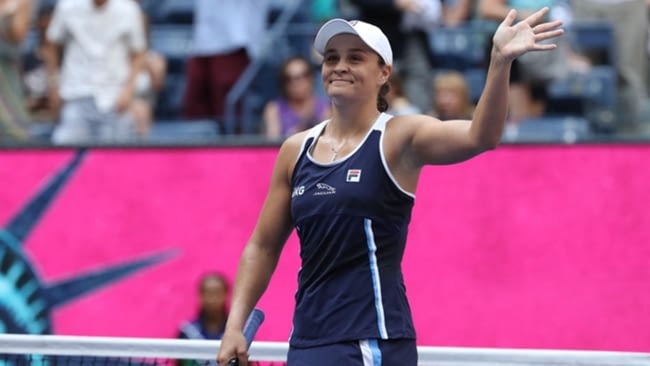