Carlos Alcaraz pulled off a stunning US Open win
Carlos Alcaraz put his name up in lights in New York as the 18-year-old stunned third seed Stefanos Tsitsipas in a massive US Open third-round upset.

French Open runner-up Tsitsipas became the biggest casualty of the men’s tournament so far as hot prospect Alcaraz showed his mettle on the grand slam stage at Flushing Meadows.

It means Alcaraz, rated by many as Spain’s best young male player since Rafael Nadal first emerged, has reached the fourth round of a major for the first time in his career.

He becomes the youngest player to reach the last 16 of the US Open since Americans Michael Chang and Pete Sampras in 1989.

The US Open said the win made Alcaraz the youngest man to beat a top-three opponent at the tournament since the ATP introduced its world ranking system in 1973.

Alcaraz put a dire fourth set behind him and looked to have won the match with a lob at 6-4 in the deciding tie-break, but his ball landed a whisker long.

That meant the players were back on serve, but Alcaraz was unbowed and sealed victory with a scorching forehand winner, announcing himself as a likely superstar of the near future. He struck 61 winners in all.

He will face German qualifier Peter Gojowczyk in the fourth round, with a quarter-final place at stake.

Speaking on court after his win, Alcaraz hailed the supportive New York spectators who were firmly in his corner.

“I think without this crowd I haven’t the possibility to win this match,” he said. “Thank you to you the crowd for pushing me up in the fifth set

“It has been an incredible feeling for me. This victory means a lot to me. It’s the best match of my career, the best win.

“For me to beat Stefanos Tsitsipas is a dream come true for me and to do it here is more special.” 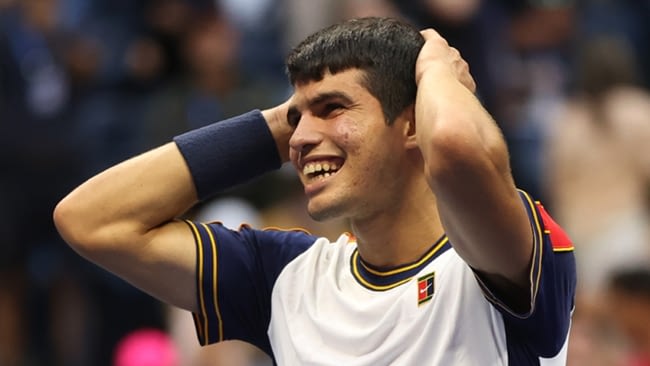