Emma Raducanu came within one point of a sensational double bagel against Sara Sorribes Tormo and could face Ash Barty next at the US Open.

The 18-year-old Briton came through qualifying to make her Flushing Meadows bow this week.

And now Raducanu is remarkably into week two without dropping a set.

She saved her best performance yet for round three, winning 6-0 6-1 after passing up a match point on Sorribes Tormo’s serve that would have sealed a flawless result.

Her place in the fourth round was a fine consolation for Raducanu, who reached the same stage at Wimbledon in July, then appearing in a grand slam main draw for the first time.

A match against Ajla Tomljanovic proved a step too far at the All England Club, but Raducanu may now get an opportunity to advance against another Australian.

If Barty beats Shelby Rogers later on Saturday, the world number one will face Raducanu next week – presumably far away from the Court 17 the teenager was consigned to on this occasion.

Given Sorribes Tormo beat Barty in straight sets in the first round of this year’s Olympic Games, Raducanu should have nothing to fear.

“It’s been two weeks in New York now,” she told Prime Video. “And into the third week – I never thought I’d be here, but I’m just so, so excited.”

Raducanu said of her latest triumph: “I was playing very well. I know Sara is an extremely tough opponent – she doesn’t make a mistake, so you have to be on your game every single point.

“I had to work so hard, and there were some really, really long deuce games that could have gone either way, so I’m just really happy that I managed to maintain and stay on it and win in the end.”

It was a far more comprehensive success than Raducanu was willing to admit, though, with the world number 150 having 11 break point opportunities to her opponent’s zero.

Raducanu’s blistering forehand averaged 92 miles per hour on serve, while she played 23 winners.

“Honestly, for this one, the plan was I had to hit through her, I had to hit the corners,” she added. “If you trade against her, you’re probably going to come out second best.

“I just took the game to her and hit more winners than errors today.” 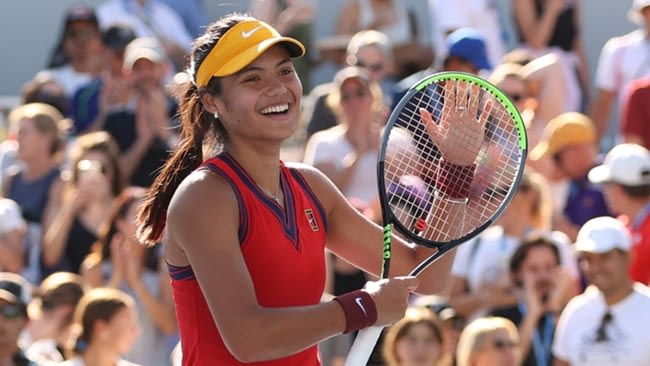