Reigning champion Osaka appeared on course to progress when up a set and serving for the match at Arthur Ashe Stadium, only to let the opportunity slip away.

The world number three lost her serve and then also her composure in the tie-break that followed, throwing her racquet on more than one occasion as Fernandez prevailed to force a decider.

The Canadian teenager broke immediately at the start of the third set and retained that advantage through to the finish, allowing her to complete a famous victory in New York.

“I wasn’t really focused on Naomi, I was focused on my game and what I needed to do,” Fernandez told the media.

“Having the crowd there, supporting me, backing me up after every point, it was amazing. It gave me the energy to keep fighting, keep working, keep running for those balls that she hit.

“I was just glad that I was able to put on a show for everyone who came to watch.”

The 18-year-old also explained how she has always had a competitive streak, adding: “From a very young age, I knew I was able to beat anyone who was in front of me.

“Even playing different sports, I was always that competitive and saying I was going to win against them, win against my dad in soccer, even though that was impossible, I’ve always had that belief, tried to use that in every match when I go on. I guess today that belief came true.”

Osaka announced in her post-match media duties that she plans to “take a break from playing for a while”, as well as apologising for her outbursts on court.

She received a warning for hitting a ball into the stands but appeared set to launch a fightback of her own in the deciding set, only for the impressive Fernandez to hold firm.

“She is a great example for anybody on Tour, and all the little girls in the world.

“I’m just glad I had the opportunity to play against her, show everyone I am also able to compete against the best players out there 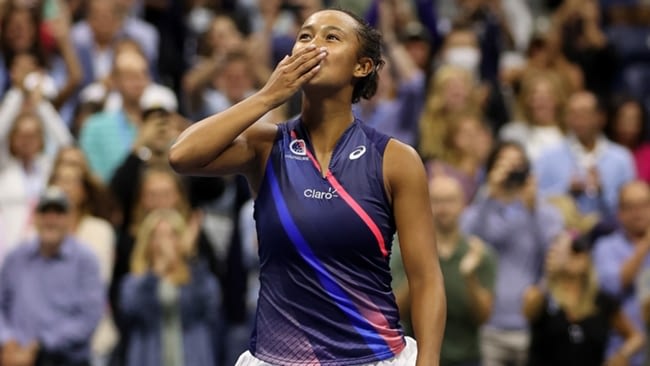