Novak Djokovic welcomed the ongoing ‘GOAT’ discussion alongside Rafael Nadal and Roger Federer after the world number one took another step towards an historic grand slam title at the US Open.

Djokovic, Nadal and Federer share the most men’s slams in history with 20 but the former has the chance to break the record at Flushing Meadows, where the top seed dismantled unheralded Dutchman Tallon Griekspoor 6-2 6-3 6-2 in the second round on Thursday.

Serb star Djokovic is also bidding to become just the third man to complete a calendar Grand Slam and the first to sweep all four majors in a year since Rod Laver in 1969.

It is widely debated who is the greatest player of all time among Djokovic, Nadal and Federer – the latter two are both absent from this year’s US Open due to injury.

After reaching the third round in New York, Djokovic was asked who the better player on a neutral surface is, given Nadal’s clay-court dominance and Federer’s grass-court expertise.

“It’s difficult to say who is better. Three of us, we’re all so different. We have different styles,” Djokovic said during his post-match news conference.

“We have different trajectories or journeys to where we are at this moment. We all had tremendous success, some more particularly on one surface, some the other surface.

“We do complement each other. I think the rivalry between the big three, so to say, it’s phenomenal for our sport.

“So the more traction, the more conversation there is around the three of us, the GOAT discussion, et cetera, the better in general for our sport. I hope people still keep on talking about it.”

Djokovic added: “I think actually one of the best I think images that I’ve ever seen from tennis is them [Nadal and Federer] playing on a half-grass, half-clay court.

“I thought that was fantastic. Whoever came up with the idea was genius. As a tennis fan, I enjoyed that very much.”

Djokovic hit 33 winners, fired down 13 aces and broke six times throughout a dominant performance against Griekspoor under the Arthur Ashe Stadium lights.

Kei Nishikori awaits Djokovic, who owns a 17-2 head-to-head record against the 2014 US Open runner-up.

“We played many times. I have very good score against him,” Djokovic said of Nishikori. “I lost I think last time here in New York in semis in 2014. Historically I think his most successful grand slam is here. He’s one of the quickest and most-talented players that I’ve seen in my lifetime, in my career.

“I think it’s important for me to serve well and try to take off the pace a little bit because he likes the pace. He likes to hit the ball early, protect the line. But I know his game well. We played in Olympic Games. I know what’s expecting me. I look forward to a good challenge.” 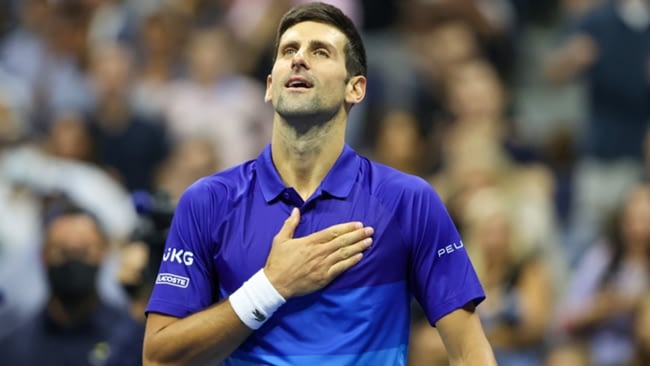