Novak Djokovic powered through to week two of the US Open by sinking Kei Nishikori, a player who must be sick of the sight of the Serbian.

For a 17th consecutive time in their rivalry, Djokovic beat the former world number four, who was runner-up at this tournament seven years ago.

A 6-7 (4-7) 6-3 6-3 6-2 victory in three hours and 33 minutes for Djokovic moves him into the fourth round, ever closer to the calendar Grand Slam he is chasing, having already won the Australian Open, French Open and Wimbledon.

Nishikori beat Djokovic in the US Open semi-finals in 2014, before losing to Marin Cilic in the final, but that was the last time he got the better of the man from Belgrade.

Djokovic won their 2018 semi-final at Flushing Meadows for the loss of just nine games and a 6-2 6-0 win for the world number one over Japan’s Nishikori at the Tokyo Olympics in July suggested this latest clash in New York, the 20th between them, could be similarly one-sided.

Yet it became clear early in this clash that Djokovic faced a substantial test. He trailed 4-2 in the opener and could not save the set, despite forcing a tie-break. A stunning lob from Nishikori gave him two serves for the set, and he held his nerve to move in front.

Djokovic broke in the third game of the second set though and staved off a flurry of break-back points on his way to levelling the match.

When Nishikori served a double fault to allow Djokovic two break points in game four of the third set, it was inviting trouble. Djokovic won the second of those when his low slice and net rush prompted Nishikori to net a backhand.

Against the flow of the match, Nishikori broke back, helped by two consecutive double faults, but order was restored as Djokovic rolled through the next two games to move a set away from the next round.

Nishikori probably needed Djokovic’s body to fail him, or for something as bizarre as last year’s disqualification to occur, but nothing of the sort happened in set four, the world’s best player in a class of his own.

Djokovic said: “I don’t think I started off very well. I was too passive and too far back in the court and he was dictating the play. It took me a little bit of time to adjust to his game.

“By the beginning of the second set I felt like I was getting my groove back, getting my rhythm back. I was very pleased with my focus.”

Nishikori will look back to the second set and ponder ‘what if?’, because he had seven break points and took none of them. Djokovic had three in that set and took two, and there lies greatness. Tennis comes down to taking chances as they arrive, being clinical, and after the chaos of the first set this was a ruthless Djokovic show. 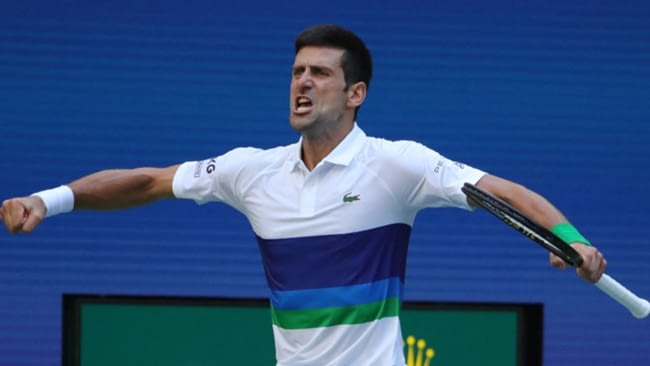