Spanish sensation Carlos Alcaraz
Carlos Alcaraz was lost for words after making history in the Spanish teenager’s shock five-set upset of world number three Stefanos Tsitsipas at the US Open.

The 18-year-old Alcaraz became the youngest player to reach the last 16 of the US Open since Americans Michael Chang and Pete Sampras in 1989.

Alcaraz also became the youngest man to beat a top-three opponent at the tournament since the ATP introduced its world ranking system in 1973.

After more than four hours on Arthur Ashe Stadium, Alcaraz told reporters: “I have not words to explain how I feeling right now.

“I just don’t know what happened out there in the court. I can’t believe that I beat Stefanos Tsitsipas in an epic match.

Amid comparisons with countryman Nadal, Alcaraz added: “Honestly I don’t copy any style of a players. I just play my game.

“But if I have to say one player that is similar my game, I think it’s [Roger] Federer. I think similar as mine game, trying to be aggressive all the time. I think it’s a good similar for me.”

After his US Open campaign came to a surprise end, third seed Tsitsipas tipped Alcaraz for future success.

“A hundred percent,” Tsitsipas replied when asked if he had a sense of Alcaraz’s potential. “I said he can be a contender for Grand Slam titles. He has the game to be there.”

“I’ve never seen someone hit the ball so hard,” French Open runner-up Tsitsipas added. “Took time to adjust. Took time to kind of develop my game around his game style.

“It’s one of these matches and one of these feelings where, you know, you pick up at some point of the match, you feel like you’re in control, and it doesn’t really go your way at the end.

“It’s kind of bitter, I would say, especially after such an incredible first set by my side, dominating, being just so aggressive, not dwelling on the past. It was a great first set.

“I don’t know. I felt like he played the fifth one completely — the way he played the first set basically, careless, going for every single shot. I have never seen someone play such a good fifth set, honestly.” 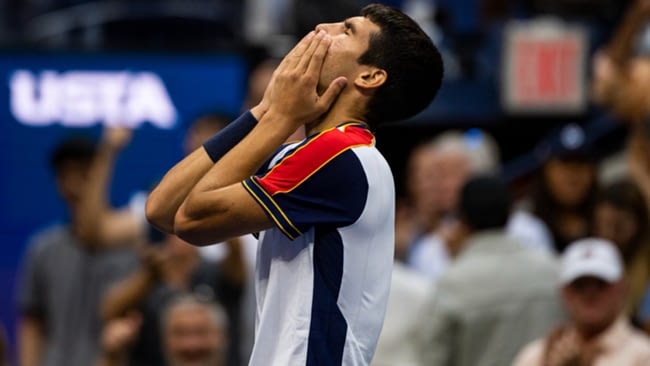