USA’s Christian Pulisic (L) in action against Canada
The United States’ stuttering start to World Cup qualifying continued after they were held to a 1-1 draw by rivals Canada.

Brendan Aaronson’s 56th-minute opener was cancelled out within six minutes by Canada forward Cyle Larin as the USA drew consecutive games on the road to Qatar 2022.

Weston McKennie, though, was axed from the squad following a “violation of team policy”, while Giovanni Reyna sat out due to a hamstring injury.

Canada made a lively start on the road in Nashville, where Larin checked his run and got on the end of Alphonso Davies’ pass, but Matthew Turner somehow pushed the shot onto the crossbar in the 14th minute.

USA went close to breaking the deadlock five minutes before the break when Pulisic’s shot hit the post from close-range.

CONCACAF Gold Cup champions the USA, though, did open the scoring via Aaronson, who slid onto the end of Antonee Robinson’s cross 11 minutes into the second half.

The lead was short-lived however as Davies showed off his incredible pace, driving towards the penalty area before teeing up Larin for a simple tap-in just past the hour-mark.

Despite the draw, the USA extended their unbeaten streak to 11 matches across all competitions.

The United States and Canada both have two points from their opening two fixtures. 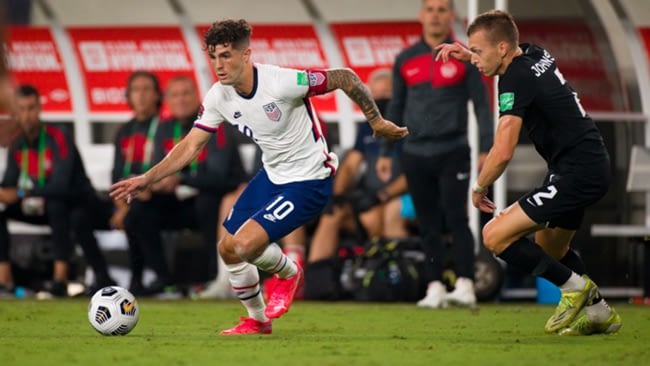