Anthony Martial (R) with Paul Pogba in France’s draw with Ukraine
Anthony Martial scored just his second goal for France as the world champions were held to a 1-1 draw by Ukraine in World Cup qualifying.

Mykola Shaparenko’s sublime strike had put the home side in front just before half-time, but Martial forced home an equaliser five minutes after the restart.

Substitute Moussa Diaby hit the post as Les Bleus toiled in vain to find a winner, with Didier Deschamps’ men having now drawn five matches in a row in all competitions.

France were winless in four games in Kiev heading into this contest and there was little that was confident about their early play, Antoine Griezmann flashing a shot wide with one of his few openings.

Ukraine looked more dangerous on the break and Andriy Yarmolenko spurned a good chance when his header was saved by Hugo Lloris.

The breakthrough came just before half-time. Martial was denied by Andriy Pyatov after being played in by Paul Pogba, and the home side broke forward, Roman Yaremchuk’s cross was cleared by Kurt Zouma to Shaparenko on the edge of the box, and he swept a stylish first-time strike high past Lloris.

Martial’s miss took him to 28 consecutive shots without scoring for France, but he had more luck with his next attempt. Adrien Rabiot’s header dropped kindly for the Manchester United forward, whose half-volley from six yards was too powerful for Pyatov to keep out.

Diaby skipped into space after good work from Benzema but his low strike clattered off the base of the right-hand post, before Pogba tried his luck with a long-range strike that Pyatov held, as the visitors toiled to no further avail.

What does it mean?
France have nine points from five matches in Group D, giving them a five-point lead at the top having played two more matches than second-place Finland.

The world champions are unbeaten in qualifying for Qatar 2022 and remain in a good position, but there is growing concern around their uninspiring performances.

France’s five successive draws include three games at Euro 2020, where after a 3-3 draw with Switzerland in the last 16 they lost a penalty shoot-out.

Ukraine are third in the World Cup group, having drawn all five of their games.

Pogba pulling the strings
Almost all of France’s good work came through Pogba, who attempted a huge 66 passes in the Ukraine half as he tried to pick through a resolute defence.

There was little creativity aside from the United midfielder, which explained his ambitious shot as the clock began to tick down.

Can the rescue act continue?
France have conceded the opening goal in five consecutive matches, their longest such run since the days of Raymond Domenech from November 2009 to June 2010.

There is over a year to go until Qatar 2022, but France at the moment appear to be limping their way towards defending their crown.

What’s next?
France host Finland in World Cup qualifying on Tuesday, with Ukraine heading to the Czech Republic for a friendly a day later. 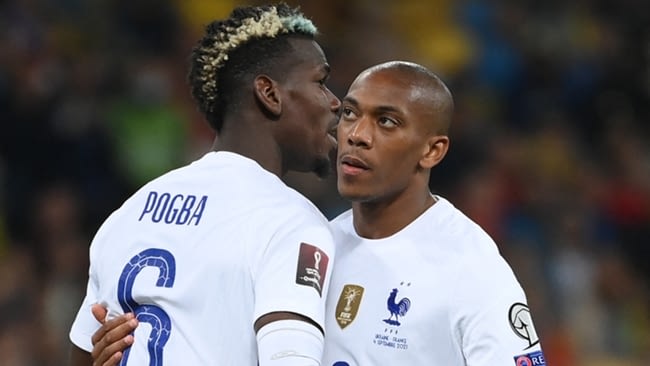