Sarah Storey said it was “truly amazing” to land a 17th gold medal as the cycling star became Britain’s most decorated Paralympic athlete of all time.

Storey began her Paralympic Games career in 1992 at Barcelona, when she competed in swimming and bagged her first two golds.

After a stunning transition to cycling following Athens 2004, Storey has not looked back, adding 12 gold medals to the five she won previously in the pool.

Storey has been competing in her eighth Paralympics this year in Japan and said she “couldn’t have imagined” enjoying such longevity and rich reward coming her way.

“It’s the dream I didn’t think would come true,” Storey said. “I just wanted to be a British athlete, I wanted to compete for my country for as long as I possibly could, and to still be going strong in Games number eight is truly amazing.

“I never felt a weight on my shoulders. You’re defending a title and it’s added to a tally afterwards. I’ve never really felt that pressure to be overwhelming before a race. It’s just each race as it comes.”

She added, according to Paralympics GB: “It is the sweetest feeling to know that I go back to my room and there are a couple of gold medals in the safe to put this one with. That makes that tally very real then.”

Germany’s Kerstin Brachtendorf, 49, had made a bold breakaway that saw her move over a minute clear at one point; however, she was reeled in and eventually finished fifth, with Storey crossing the line seven seconds ahead of Lane-Wright.

Storey could yet target Paris 2024, having declared Tokyo will not necessarily mark the end of her Paralympics career, but Lane-Wright has reached the end of this particular road.

“Right now, I never want to look at a bike again,” Lane-Wright said. “When we came up the climb I told myself, ‘last time I ever have to do this’.

“When Sarah and I got away, I told her it was her gold medal. I said, ‘You don’t have to worry, I’m not even going to attempt to take it away from you’.

“There are times when I think, ‘What would Sarah do?’. She inspires me that much.” 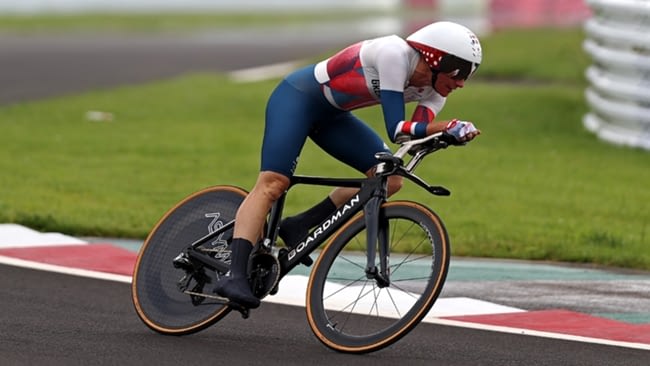