Patten played for the Patriots between 2001 and 2004 and won three Championship rings with the franchise.

He had previously played for the Cleveland Browns and the New York Giants and went on to have spells in Washington and New Orleans before returning to Ohio and then New England to round off his career as an offseason and practice squad member.

The former wide receiver, who had been the assistant coach of the Western Carolina Catamounts since 2013, cemented his place in Pats history when he caught Tom Brady’s first postseason touchdown pass to put New England 14-3 ahead against the St. Louis Rams in 2002.

New England went on to win 20-17, with the catch the only one Patten made in the game. It was Brady’s first Super Bowl success, and the quarterback went on to become an all-time great, winning the Championship game on seven occasions, most recently with the Tampa Bay Buccaneers earlier this year.

Patten tallied up 4,715 regular-season receiving yards over a 12-year career in the NFL, and 106 for rushing.

On Friday, news of his passing was confirmed by Sam Gordon, who runs the G2 Management agency of which Patten was a client.

“Today, I woke up to the worst news you could hear,” Gordon posted on Instagram, alongside a photo of himself and Patten.

“Very rarely do people get to call their childhood heroes/favorite players their friends. Or even have them take a chance on you. You blessed with me with that. You blessed me with your belief in me when I was getting my company off of the ground.

“But most important of all, you were there to talk when the stress was too great and I was unsure of myself in my field. Mr Patten. My friend, my hero, the first one to believe in me as a manager/agent. I will miss you every day.

“Thank you David Patten. Thank you so much for your friendship, your inspiration, believing in me and trusting me to be your manager.”

Richard Seymour, who was Patten’s team-mate during his stint with the Patriots, tweeted: “heartbroken… great man of God… lost for words – David Patten…” 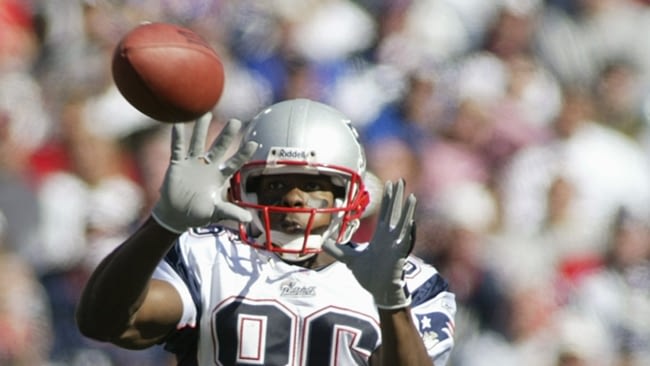