Italy midfielder Jorginho missed a penalty against Switzerland
Italy were held to a goalless draw by Switzerland at St Jakob-Park in Sunday’s World Cup qualifier as they extended their unbeaten run to 36 games and matched the all-time record.

The Azzurri equalled Spain’s European mark with a 1-1 draw against Bulgaria earlier this week and are now level with Brazil’s global record, set between 1993 and 1996.

But the point will be considered a disappointment by Roberto Mancini as Jorginho missed a penalty and the wasteful visitors squandered a number of other presentable opportunities.

The draw leaves Italy, who had scored in each of their previous 17 matches, top of Group C and four points better off than a Switzerland side with two games in hand to play.

Domenico Berardi was reinstated in Italy’s starting line-up and wasted the best of the first-half chances when failing to beat Yann Sommer after being played clean through.

Lorenzo Insigne was denied from a free-kick by Sommer, who was also equal to a weak shot from Ciro Immobile after Manuel Akanji had glanced just over at the other end.

An annoyed Mancini’s mood did not improve eight minutes into the second half as Jorginho’s tame penalty, awarded for Ricardo Rodriguez’s foul on Berardi, was easily saved by Sommer.

That was the first penalty Jorginho has missed for Italy at the sixth time of taking one, excluding shoot-outs, having missed one in the Euro 2020 final against England.

Mancini instantly turned to substitutes Federico Chiesa and Nicolo Zaniolo but Italy struggled to create many more openings, with Insigne not getting enough power behind his shot to beat Sommer from the best of those.

What does it mean? Wasteful Italy draw again

Mancini called on his players to show more ruthlessness in Basel following their disappointing display against Bulgaria, but this performance was even more profligate than the last.

Insigne, Immobile and Berardi struggled in front of goal, with the latter two being taken off on the hour mark, while even penalty expert Jorginho had an off day as Italy drew for the fourth game running in normal time.

Ultimately, though, a point away at Switzerland could prove to be a positive one for the European champions as they still have to play the second seeds at home in November.

Berardi, given the nod over Chiesa in the frontline, fired pretty much straight at Sommer when given half the length of the pitch to run into and nobody close by.

As poor as Italy were when it came to finishing, credit must also go to Swiss captain Sommer, who made seven stops in total – including a penalty save against Jorginho.

Locatelli proved to be one of the stars of Euro 2020 and earned a move to Juventus on the back of his displays.

He showed once again today with his three big chances created and three tackles – both game-highs – just why he can no longer be overlooked by Mancini for regular starts.

Italy conclude their triple-header of September qualifiers with a home game against Lithuania on Wednesday, while Switzerland travel to Northern Ireland in their next Group C match. 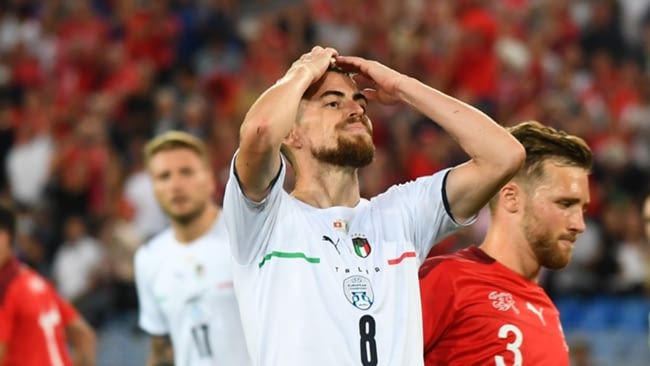