Pablo Sarabia after scoring for Spain against Georgia
Luis Enrique was pleased with the way Spain responded to their defeat to Sweden with a comfortable victory over Georgia on Sunday.

La Roja suffered a shock 2-1 loss in Stockholm on Thursday, their first in 66 World Cup qualifying matches stretching back to 1993.

They bounced back in style in Badajoz, with goals from Jose Gaya, Carlos Soler, Ferran Torres and Pablo Sarabia securing a 4-0 win.

Head coach Luis Enrique felt the margin of victory could have been even greater given Spain’s dominance, with Torres and Sarabia each seeing a goal disallowed for offside in a match in which the home side completed 820 passes to Georgia’s 264.

“We professionals are used to living on a rollercoaster,” Luis Enrique said. “You have to go through pain after a defeat, but quickly bite the bullet and think about the next game.

“Although it seems like the result was easy, it wasn’t. We got through them on the inside, the outside, we created chances and we could have scored more goals.”

The only disappointment for Spain was seeing some players forced off with physical problems.

While Luis Enrique thinks Aymeric Laporte was simply feeling some muscle fatigue, he is worried Gaya could have a bigger concern.

“Most of the changes were due to some discomfort for the players. I hope there are no serious injuries. That’s the bad news,” he said.

“Laporte has nothing, it’s just a small overload. I don’t think they’ll even test him.

“Gaya does not look good.” 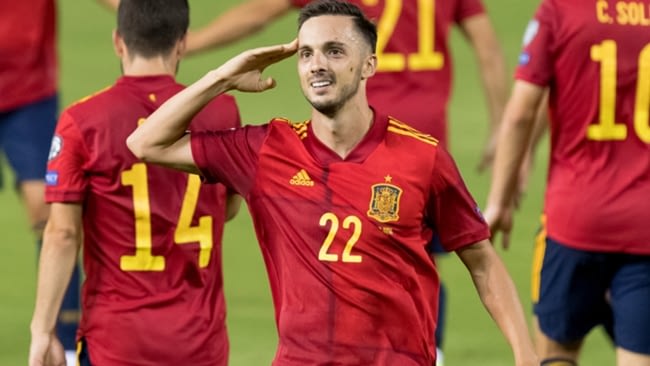