Gareth Southgate again praised his England players for their opposition to racism amid allegations they were abused during Thursday’s 4-0 win in Hungary.

England secured a superb victory in Budapest, moving five points clear at the top of Group I in qualifying for the 2022 World Cup.

But this latest triumph was marred by the actions of Hungary supporters as their side suffered their heaviest defeat in 118 home World Cup qualifiers.

Objects were thrown at Sterling and his team-mates as they celebrated, while there were also reports of chants aimed at the Manchester City forward.

Southgate, like several of his players, said he had not heard the abuse, although England’s decision to take the knee at kick-off was widely jeered.

He added: “It sounds like there have been some incidents and everybody knows what we stand for as a team and that that’s completely unacceptable.”

A Football Association spokesperson said: “It is extremely disappointing to hear reports of discriminatory actions towards some of our England players.

“We will be asking FIFA to investigate the matter.

“We continue to support the players and staff in our collective determination to highlight and tackle discrimination in all its forms.”

Southgate’s England have repeatedly taken a stand against racism, although the manager has been keen to highlight the negative responses to these demonstrations from a section of their own support.

“It’s still taking us a long, long time to get to where we want to get to, and inevitably if other countries don’t have the same level of diversity, it’s probably not been in their thinking in the same way it has in our country,” he explained.

Little of Southgate’s post-match news conference focused on the game – a 25th World Cup qualifier in succession without defeat – but he praised his players throughout.

“I don’t think our players can do any more than they have done in the last two or three years in getting the right messages in, making the right stands,” he said.

The Three Lions boss added: “[The players] recognise that the world is changing and, although some people are stuck in their ways of thinking and their prejudices, they’re going to be the dinosaurs in the end, because the world is modernising.”

He finished his media duties saying: “I’m always conscious that whenever I speak about this, I don’t know if I get exactly the right tone or the right words – I never want to be dismissive of it.

“Our intentions are good and we hope that people understand that and respect that.” 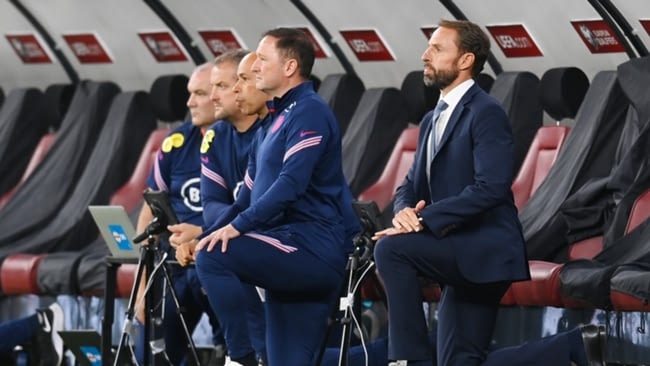