Lionel Messi (L) and Argentina celebrate against Venezuela
Argentina head coach Lionel Scaloni urged his team not to “rest on our laurels” after the in-form Copa America champions set up a mouth-watering top-of-the-table World Cup qualifying showdown with rivals Brazil.

Lautaro Martinez, Joaquin Correa and Angel Correa were on target as Argentina extended their unbeaten streak to 21 matches by downing 10-man Venezuela 3-1 in CONMEBOL qualifying on Thursday.

After first-half substitute Luis Martinez was sent off for a horrifying challenge on Lionel Messi in the 32nd minute, Argentina – playing for the first time since July’s drought-ending Copa triumph over Brazil, their first title in 28 years – took control of proceedings.

Argentina are second and unbeaten through seven qualifiers on the road to Qatar 2022, six points behind Brazil, while they have not tasted defeat since November 2019.

As Argentina turn their attention to Sunday’s blockbuster in Sao Paulo, where Brazil will put their perfect record on the line, Scaloni told reporters post-game: “It’s special for the players to have the patch of champions on their chest, they fought so hard to win the Copa America.

“The important thing is to not rest on our laurels.”

The complexion of the match changed when Luis Martinez – who replaced Jose Velazquez earlier in the half – saw red.

Messi went to ground after receiving a high foot to the shin and the challenge, initially a yellow card, was upgraded to red after the referee consulted the pitch-side monitor following a VAR review.

Lautaro Martinez then opened the scoring in the second minute of first-half stoppage time, the Inter star scoring his third goal in qualifying after being played through by Giovani Lo Celso.

Joaquin Correa and Angel Correa struck within three minutes – the 71st and 74th minute – to put the result beyond doubt, though Yeferson Soteldo’s last-gasp spot-kick gave the home crowd something to celebrate.

Looking ahead to the Copa America final rematch with Brazil, Scaloni added: “We will have time to analyse how the players are. It will be a different game and everyone is available.

“We have things to improve, surely, but I’m not going to say them. We always have to improve, when you win or lose. We will try to do our best.”

Lautaro Martinez added: “The three points are very important. Venezuela is a very complicated opponent. In South America, they’re all difficult but we had a great first half.

“We created chances and after the goal we were able to work with more peace of mind. We brought home three important points. I think we had a great first half today, beyond the fact that they were down a man.

“For a striker, it’s important to score but the most important thing is that the Argentina national team win. You always have to think about the group.” 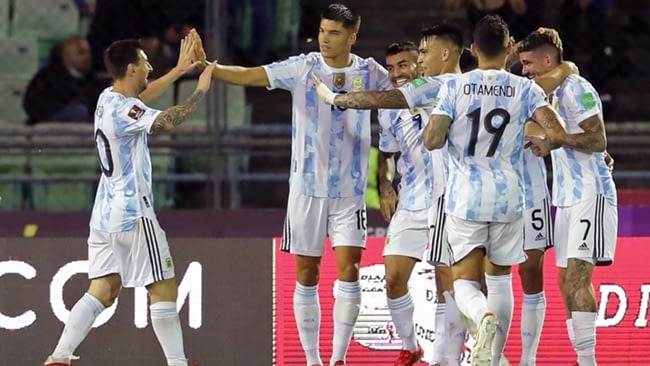