Argentina head coach Lionel Scaloni wants to play star man Lionel Messi in all three of the side’s upcoming World Cup qualifiers despite his lack of game-time at club level.

Messi joined Paris Saint-Germain from Barcelona last month but only made his debut as a 66th-minute substitute in Sunday’s 2-0 win at Reims.

The six-time Ballon d’Or had been left out previously as he built up his fitness having not played since Argentina’s Copa America final victory over Brazil on July 10.

Messi has now linked up with the Argentine squad ahead of three qualifiers against Venezuela, Brazil and Bolivia.

“We evaluate match by match and when I’ve spoken to [Messi] he says he’s fine,” Scaloni told reporters.

“Obviously he doesn’t have the same minutes in him as he did ahead of the Copa America but everyone knows what I think of him and he will play all three games if he is fit.”

Scaloni was pressed on whether he preferred 34-year-old Messi to be playing in LaLiga with Barcelona or Ligue 1 with PSG but would not be drawn.

PSG, who were Ligue 1 runners-up last season, are one of the favourites for this season’s Champions League title.

“If Messi was at Barcelona he would play with Sergio [Aguero],” Scaloni said. “We stay totally outside the transfer market because we know that being part of the Argentina squad is totally different to being at a club.

“Logically if we had to choose, we’d choose from him to be with many Argentines because that helps.

“We have no preferences, we know he is at a good club, one of the best in Europe and that will compete on the biggest stages. That is the most important thing.” 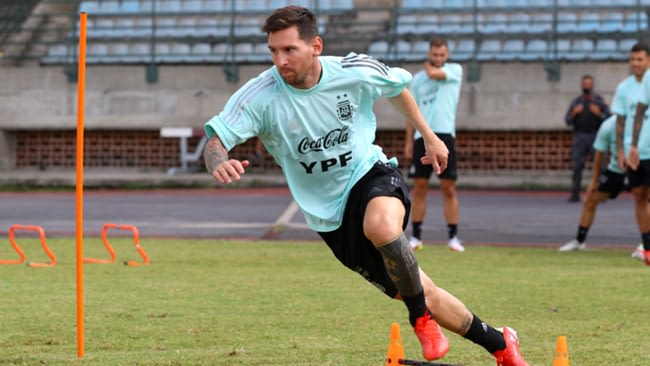