Otavio marked his senior international debut with a goal as Portugal beat nine-man Qatar 3-1 in Saturday’s international friendly at the Nagyerdei Stadium in Hungary.

Portugal made 11 changes on the back of their dramatic 2-1 win over Republic of Ireland on Wednesday and initially looked disjointed in the opening quarter of the contest.

But quickfire headers from Andre Silva and Otavio put Portugal in control before half-time, at which point Qatar were a player light following Meshaal Barsham’s dismissal.

Without talismanic skipper Cristiano Ronaldo, Fernando Santos’ side were given a scare when Abdelkarim Hassan pulled one back, though Boualem Khoukhi was next to be sent off and Bruno Fernandes made certain of the win with a late penalty.

Qatar lost 4-0 to Serbia on Wednesday but made a bright start to their latest friendly and nearly took the lead when Almoez Ali sent an angled shot crashing against the post.

Abdulaziz Hatim then called Anthony Lopes into action, but Santos’ men took the lead through their first attempt as Silva headed in Joao Mario’s cross from six yards.

Qatar’s hopes of finding a route back into the game were dented when, following a lengthy VAR review, Barsham was issued a red card for catching Guedes outside the box.

However, shortly after Joao Mario skied a glorious chance over the bar from close range, the 2022 World Cup hosts had one back through unmarked Hassan’s header.

Felix Sanchez’s side could not build on that goal, though, and Fernandes converted from 12 yards after fellow substitute Diogo Jota was fouled by Tarek Salman inside the box, a decision that led to Khoukhi being dismissed for his protests. 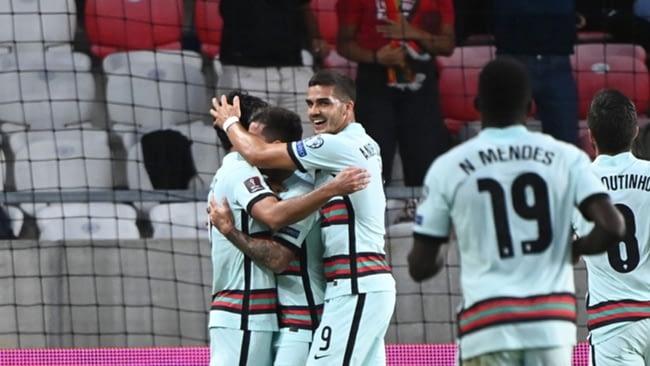