Cristiano Ronaldo became the leading goalscorer in the history of men’s international football as his late double saw Portugal beat the Republic of Ireland 2-1 in World Cup qualifying Group A.

The 36-year-old, who completed a remarkable return to Manchester United this week, had earlier missed the chance to pull clear of Iran icon Ali Daei when his penalty was saved by Gavin Bazunu.

Stephen Kenny’s side looked like they would take full advantage of that reprieve after John Egan put them ahead shortly before half-time.

As is so often the case, though, Ronaldo had the final say, drawing his side level with an 89th-minute header – his record-breaking 110th international goal – before sealing a memorable win in the dying embers of stoppage time with another trademark headed finish.

Ronaldo squandered the opportunity to claim the record in the 15th minute, Bazunu keeping out his spot-kick after Jeff Hendrick brought Bruno Fernandes down in the area.

Diogo Jota should have spared his captain’s blushes shortly before the half-hour, yet could only head Joao Cancelo’s cross against the post.

Portugal were made to pay. Rui Patricio denied Aaron Connolly but from the resulting corner Ireland went ahead, Egan superbly heading in Jamie McGrath’s cross.

Bernardo Silva inexplicably blazed over after Ronaldo’s cross had found the Manchester City man at the back post as Portugal poured forward in the closing stages.

That pressure eventually told a minute from full-time when Ronaldo – who had seen a powerful free-kick saved – powered a header past Bazunu from Goncalo Guedes’ cross.

Not content with breaking Daei’s record, Ronaldo ensured his side claimed all three points with another fine, towering header from Joao Mario’s centre in the sixth minute of added time to spark to wild celebrations at Estadio Algarve.

What does it mean? History made but Portugal leave it very late

After Ronaldo’s earlier blunder from the spot, Egan looked like he had sealed a first win in 14 competitive games for Ireland, who defended stoically only to be undone by one of the game’s greats. The former Real Madrid and Juventus man ensured the headlines would be all his courtesy of a magnificent late intervention that saw him chalk up yet another record. However, with such quality at his disposal, Fernando Santos should be disappointed it took Portugal so long to make the breakthrough.

The result means Portugal move three points clear of Serbia at the Group A summit, although they have played a game more, while Ireland remain in fourth having failed to pick up a point in their opening three games.

He might be 36 but there is plenty of life left in Ronaldo’s legs. His two goals came from a game-high eight attempts, four of which were on target. Manchester United fans will be licking their lips at the prospect of seeing him at Old Trafford again in this kind of form.

Rafa Silva is still to score for Portugal in 24 appearances and after this showing it is not hard to see why. The Benfica winger was hauled off at the interval after a dismal first half in which he failed to register a single shot or key pass.

– Portugal have won 12 of their last 13 matches in World Cup qualifying (D1) since losing 2-0 to Switzerland back in September 2016.
– Ireland have now gone 14 competitive games without a victory (D7 L7), their outright longest run of competitive fixtures without a win.
– Ronaldo failed to score from the penalty spot for Portugal for the first time in his last seven attempts, since failing to convert against Iran at the 2018 World Cup.
– Egan scored his first-ever goal for Ireland in his 15th appearance and with just his second shot on target. He is the first player to score a competitive goal for Ireland against Portugal since June 2001, when Roy Keane netted in a World Cup Qualifier.
– Ireland are the 45th different nation Ronaldo has found the net against.

Portugal face Qatar in a friendly on Saturday before taking on Azerbaijan in Group A three days later. Ireland, meanwhile, host Azerbaijan and Serbia in qualifying on Saturday and Tuesday respectively. 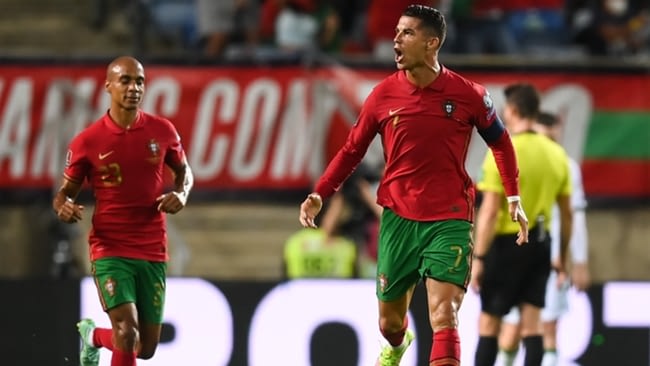