Ollie Pope’s excellent 81 had England in a healthy position on day two of the second Test before India finished strongly to leave the match deliciously poised going into the weekend.

With England reeling at 62-5, Pope shared stands of 89 and 71 with Jonny Bairstow and Moeen Ali at The Oval, while a quickfire half-century from Chris Woakes led the hosts to 290 and a 99-run first-innings lead.

But Rohit Sharma and KL Rahul made it to the close unbeaten, with India at 43-0 in their second innings and aiming to build a lead on day three in a fourth Test that could still go either way.

England were in a worrying position when nightwatchman Craig Overton and birthday boy David Malan departed to the impressive Umesh Yadav in a bright start to the morning session for the tourists.

But India soon lost their discipline, with Pope – playing his first Test of an excellent series – fluently turning the tide, aggressively hitting Shardul Thakur for four three times in the same over.

Bairstow (37) looked in the mood too, only to be trapped lbw before lunch by Mohammed Siraj. Moeen (35) took up the mantle but cheaply slogged a slower Ravindra Jadeja delivery to the covers.

Pope remained stubborn in his resistance until he dabbed at a Thakur outswinger and edged onto his wickets.

Woakes continued to frustrate India, though, and a valuable 35-run 10th-wicket stand alongside James Anderson – who contributed a solitary run to the effort – left England with a decent lead.

By the close India had chipped their arrears down to 56, with Rohit surpassing 15,000 international career runs and unbeaten on 20 alongside Rahul (22).

POPE TO THE RESCUE

Prior to Friday’s play, Pope had reached 50 on nine occasions at his home ground in first-class cricket, converting seven of those knocks to centuries.

His latest half-century did not lead to three figures, but had it not been for his measured display then the outlook of this Test would have been looking significantly bleaker for Joe Root’s men.

Before the start of play, Pope was averaging 100.71 in first-class matches at The Oval, and he stepped up again.

Returning to the Test arena for the first time in over a year, Woakes made up for lost time with four wickets on day one on Thursday.

His contribution with the bat here was just as valuable. Having been on course at one stage to be trailing after the first innings, Woakes’ knock of 50 – which came off 60 balls and contained 11 fours – added to the foundations Pope had built for England. 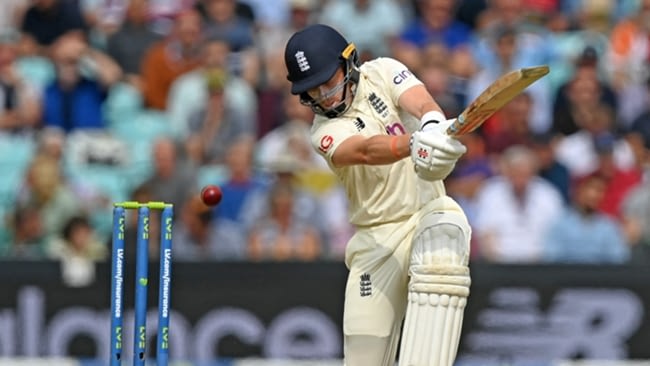