Cam Newton has been cut by the New England Patriots, according to widespread reports, leaving Mac Jones as the new starting quarterback.

Newton and Jones had appeared in a battle for the starting spot ahead of the 2021 season.

On Sunday, after the Pats’ final preseason game against the New York Giants, coach Bill Belichick refused to declare his starter, saying: “We still have decisions to make.”

But Newton played just 39 snaps in preseason, also missing five days due to a “misunderstanding” relating to COVID-19 tests. He has now been released.

The decision clears a path for Jones, a first-round pick who led Alabama to the College Football Playoff National Championship this year.

Belichick will hope the 22-year-old can be a long-term replacement for Tom Brady, who left for the Tampa Bay Buccaneers before last season and went on to win the Super Bowl.

Newton was signed as a free agent to fill the void but completed just 65.8 per cent of his passes for 2,657 yards, eight touchdowns and 10 interceptions across 15 regular season games.

Although the 32-year-old did rush for 12 touchdowns – the most since 14 in his rookie year with Carolina Panthers in 2011 – even his underlying numbers through the air were poor.

Newton delivered a well-thrown, accurate ball on 76.1 per cent of his passes while averaging 7.07 air yards, below the 2020 league averages for quarterbacks with at least 100 attempts in both metrics (78.0 per cent and 8.16).

The departing three-time Pro Bowler was still handed a one-year contract ahead of Jones’ arrival, but New England have clearly seen enough from the rookie in preseason.

At Alabama, Jones showed himself to be far more effective through the air than the man he will be replacing as starter. His 83.21 well-thrown percentage ranked third in the Power 5 in 2020. 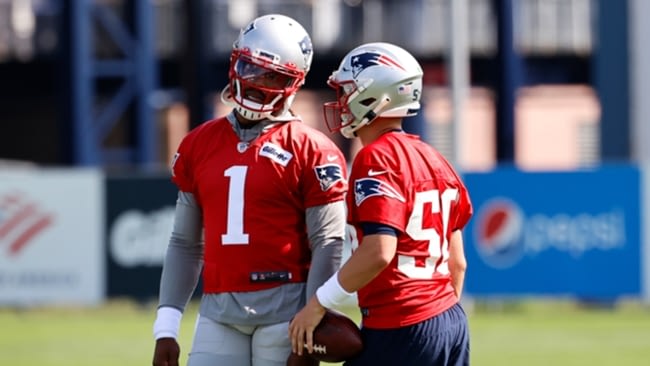