Youssoufa Moukoko dismissed his latest goalscoring record as “worthless”, believing he is still yet to achieve “anything concrete”.

That bow, the day after his 16th birthday, made the forward the youngest ever player in the Bundesliga, while he became the competition’s most junior scorer in December.

Moukoko’s Champions League debut 10 days before his strike against Union Berlin had seen him make history as the youngest player to appear in Europe’s elite club competition.

And there was another record to add on Thursday when he belatedly made his Germany Under-21 breakthrough, a first appearance delayed by injury last season.

At 16 years and 268 days, Moukoko became Germany U21s’ youngest debutant and scorer, netting twice in a 6-0 win at San Marino in qualification for the 2023 U21 European Championship.

Moukoko scored twice in the space of less than two minutes late in the first half, two of nine shots before he was substituted with 17 minutes remaining.

On Friday, the striker told the DFB’s website there were “several moments in the game where I should have done better” and he would now “work on my weaknesses”.

“It felt really good [to score],” Moukoko added. “I’ve already gotten plenty of texts and saw that I’m the youngest player to ever score for the U21s.

“Of course, I’m very proud of that, but a record like that is worthless at the end of the day. Instead, it’s more of a motivation for me to continue to work hard.”

Reflecting on the past year, he said: “There were many highs and lows, such as my injury in March. But that didn’t set me back. Instead, it motivated me to come back even stronger.

“In the beginning, it was hard to accept that I’d be forced to take a break for a while, but I was able to refocus on my rehabilitation after a few days.

“I was very proud to debut in the Bundesliga and to score, just like I was yesterday. I worked hard to get here.

“But I still haven’t achieved anything concrete. My journey is just beginning and it’s far from being over.” 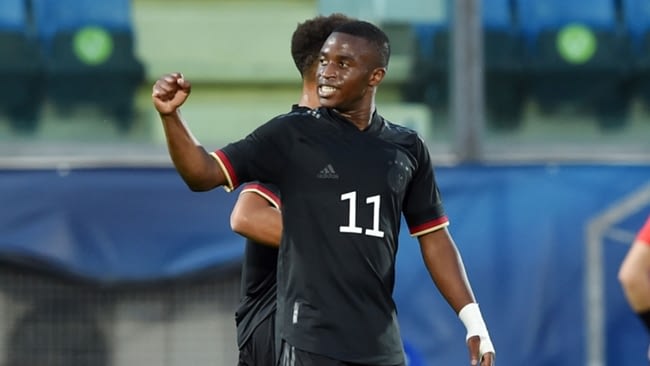