Stefano Pioli is open to fielding Olivier Giroud alongside Zlatan Ibrahimovic this season after the Frenchman opened his AC Milan account with two goals against Cagliari.

Giroud curled in a delightful first-time shot to get off the mark on his San Siro bow and doubled his tally from the penalty spot in Sunday’s Serie A clash as Milan ran out 4-1 winners.

With that first-half double, Giroud became the first player to score multiple times in his first home league match for the Rossoneri since Mario Balotelli in February 2013.

Ibrahimovic has been Milan’s go-to man up top when fit since returning to the Italian club in January 2020, but the veteran striker is currently sidelined with a knee injury sustained in May.

Pioli hopes to have Ibrahimovic back after the international break in two weeks’ time, however, and he is not against tweaking formation to pair the Swede with Giroud in attack.

“I am very open to all situations,” Milan head coach Pioli told DAZN. “I’ll take it one game at a time to pick the best line-up for that match.

“When we have the need for two strikers, I will not hesitate to use them together. I just hope to have everyone back to full fitness.”

Ibrahimovic watched from the stands as Giroud added to goals from Sandro Tonali and Rafael Leao, which came either side of Alessandro Deiola’s temporary equaliser in the first half.

Milan scored four-plus goals in the opening half of a Serie A fixture for the first time since November 2011.

Asked if he is looking forward to linking up with former Paris Saint-Germain and Manchester United striker Ibrahimovic, Giroud said: “He is a great champion and very important in the locker room.

“We want to play together, but I am happy playing with any of my team-mates. It doesn’t matter who plays, it’s important to respect the decisions of the coach.”

It was the first time Giroud has scored a league brace since April 2018, for Chelsea against Southampton, and the 34-year-old revelled in the manner his home debut turned out.

“I’m very proud to play for Milan and in a stadium like San Siro,” he told DAZN. “I’m happy with the team performance because we started the game playing our style of football.

“We really connected on the pitch and could’ve scored more, while the support from the fans was incredible.”

Giroud has inherited the number nine shirt at Milan, which is one of the most iconic jerseys in football but has more recently become a poisoned chalice of sorts.

Mario Mandzukic, Krzysztof Piatek and Gonzalo Higuain have all failed to live up to its reputation, yet Giroud is unfazed by the weight of expectation.

“I heard there was something special about the number nine shirt, but I am not superstitious,” he said. “I believe in myself and my abilities.

“As a kid, I watched Marco van Basten, Jean-Pierre Papin and Filippo Inzaghi wear this shirt, so it makes me happy to be here now.”

Milan have won their opening two Serie A games this season, just like they did last time out, but face a tough run of games upon their return to action next month.

The Rossoneri meet a Lazio side sitting top of the division on goal difference and rivals Juventus in their next two league matches, either side of kicking off their Champions League return with a trip to Liverpool.

“We’ve got a remarkable run of games coming up after the break, so we need to keep this mentality and enthusiasm,” Pioli said.

“If we really want a positive future, we must treat everyone as first-choice players. We’re missing some at the moment, a couple more might arrive, but we must train the way we want to play and play the way we train.

“We are getting used to playing entertaining football and enjoying ourselves, but we must also remember that the great teams are also capable of winning ugly.” 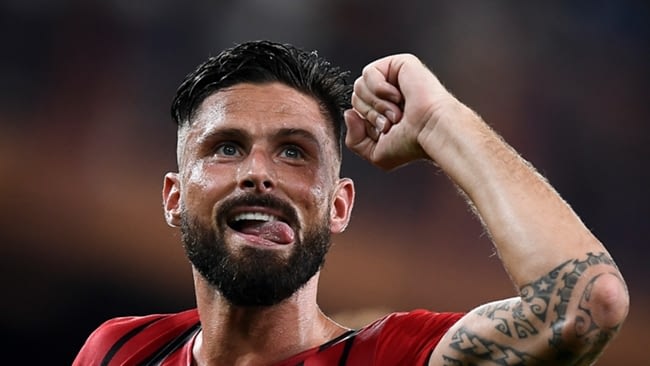