A mainstay of the Croatia national team, Mandzukic hit an extra-time winner in the 2018 World Cup semi-final against Gareth Southgate’s team, before scoring at both ends in the 4-2 final defeat to France.

He became the first player to score an own goal in a World Cup final to give France an early lead, before capitalising on a Hugo Lloris mistake to give Croatia late hope.

His retirement announcement, issued on Instagram, was in the form of a letter to his younger self, with Mandzukic saying he should “just be ready around [the] 109th minute” should he ever face England at the World Cup.

That was the minute in which he fired past Jordan Pickford to send Croatia into their first World Cup final as 2-1 winners over England.

Mandzukic’s career took off in his early twenties at Dinamo Zagreb, and he was signed by German outfit Wolfsburg in 2010 before moving on two years later to Bayern Munich, for whom he scored in the 2013 Champions League final win over Borussia Dortmund, also winning the Bundesliga twice.

Only Robert Lewandowski (44 goals) and Stefan Kiessling (40) scored more than the 33 Bundesliga goals that Mandzukic managed across his two campaigns at Bayern.

A year followed at Atletico Madrid before Mandzukic enjoyed four seasons at Juventus, winning the Serie A title each time and scoring a memorable goal in the Bianconeri’s Champions League final loss to Real Madrid in 2017.

He had a spell at Qatari side Al-Duhail and played the last football of his career for Milan in the second half of last season.

Mandzukic, who scored 33 goals in 89 matches for Croatia, addressed his farewell letter to ‘little Mario’ and wrote: “While you put on these boots for the first time, you can’t even imagine what you will get to experience in football.

“You’ll score goals at the biggest stages and you’ll win the biggest trophies with the biggest clubs. Proudly representing your nation, you will help write the history of Croatian sports.

“You’ll succeed because you’ll have good people around you – teammates, coaches, fans, and family, agent and friends who will always be there for you. You’ll be forever grateful to all of them!

“Above all, you’ll succeed because you’ll always give your best. At the end, that’s what you’ll be most proud of. You’ll sacrifice a lot, but you’ll know it was worth it because of all the amazing moments.

“You’ll recognise the moment to retire, to put these boots in a cabinet and you’ll have no regrets. Football will always be a part of your life, but you’ll look forward to a new chapter.

“P.S. If you happen to play vs England in the World Cup, just be ready around [the] 109th minute.”

Mandzukic’s winner in that clash with England came from his third goal attempt in the game, all of which he got on target. That was a lesson to an England side who collectively only put two of their 11 efforts on target.

“What a career Big Mario,” said former Juve team-mate Blaise Matuidi. “Congratulations you are a legend.” 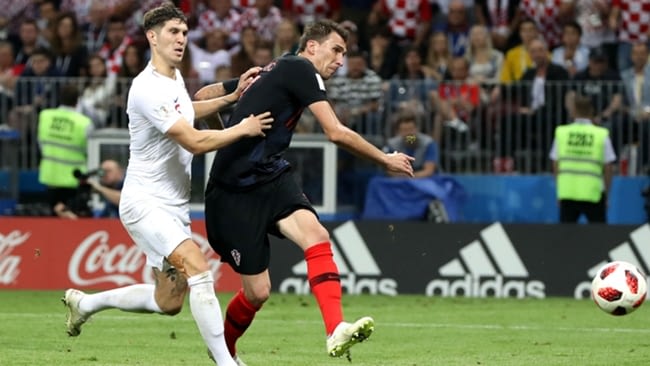