That is according to Tottenham defender Kerys Harrop, who told Stats Perform she is expecting the 2021-22 campaign to be the “most exciting yet”.

Stoney departed United at the end of last season after steering the club into the top flight and then to successive fourth-placed finishes in the WSL across her three years in charge.

The Red Devils have opted for an experienced replacement, with former Birmingham City and Orlando Pride boss Marc Skinner taking the reins.

United led the way at the top of the division come the end of last year, but hampered by injury issues they slipped down to fourth, one point behind third-placed Arsenal.

“I think it’s realistic ambition for them and certainly what Marc and the players I know there, former team-mates of mine, want,” Harrop said.

“And then you’ve still got other teams like ourselves at Tottenham and you have got Brighton, who will be wanting to push on this year as well, Everton too.

“I know we say every year that it’s going to be the most exciting season yet. But I believe it actually will be.

“Everton have invested as well as us, even Villa to an extent as well. So I think it’s going to be really important for this game for the top three places.

“But certainly in and around the top half of the league, I think it’s going to be really interesting and really exciting.”

Skinner was widely praised for his work at Birmingham, whom he led to the FA Cup final in 2017 and to fourth in the table in the WSL in 2019.

The 38-year-old finished bottom of the National Women’s Soccer League in his first season with Orlando before a more promising start to the 2021 campaign.

Harrop was part of the Birmingham side that achieved success under Skinner and expects her former manager to be a success on his return to the English game.

“It was really tough to see when he got the job [with Orlando],” Harrop said.

“You know, he kind of went out to Orlando and got that experience, but I think deep down he’d always wanted to manage in the WSL.

“I think he’s got a quite unique style of play, certainly from when I was under him at Birmingham. And he’s well respected. I know he’ll get the best out of all the players there.

“That’s certainly what he did with us at Birmingham. It’s going to be interesting to see whether his style has changed since being out in America.

“He was quite adamant on the way that he wanted his teams play.”

Harrop is entering her second season as a Tottenham player and has made the third-most appearances of any player in WSL history.

Spurs finished eighth in the top flight in 2020-21, but Harrop is hopeful of challenging United for a Champions League berth this coming season in their first full campaign under Rehanne Skinner.

“I definitely think we will improve,” she said. “You know, we’ve already kind of stayed ourselves and we want at least a top four finish, if not higher.

“Rhian’s recruited well. She’s bought in a lot of good new quality, kind of international signings really. Every year you want to improve but I think realistically we can definitely develop on last season.

“I think just having Rhian in from the beginning will help. Last season she came in in January, so it was a lot harder for her to kind of implement all her tactics and her style of play.

“This year we’ve had everyone together from the beginning of pre-season in terms of her and the coaching staff. So hopefully there will be a bit of flow to the league this year.” 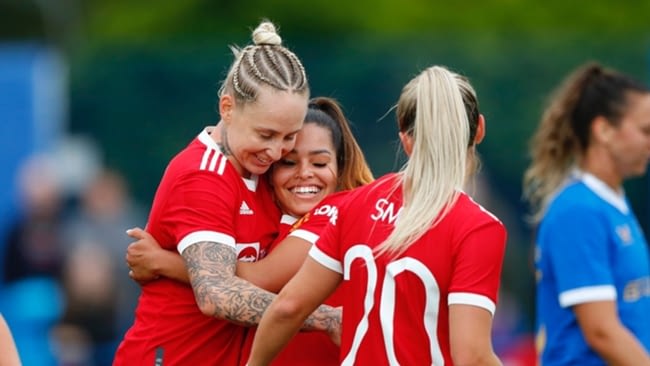