Walker backs Starman for Sprint Cup glory
Trainer Ed Walker is confident Starman will “get the job done” in the Betfair Sprint Cup at Haydock on Saturday.

The four-year-old is looking to add the Group One contest to his growing list of accolades, following on from his victory in the July Cup at Newmarket over the summer.

That triumph at Headquarters saw Starman leave the likes of Creative Force and Glen Shiel in his wake, and Walker is convinced that if his colt can replicate that form, then he will emerge victorious on Saturday as well.

“It looks a great opportunity for him,” Walker told reporters.

“You can never be confident going into any race as anything can happen with horses, but you would think in similar form, on a track that would suit him better, on ground that we know he loves, he hopefully will get the job done.”

The John and Thady Gosden-trained two-year-old was runner-up to Aidan O’Brien’s star juvenile Point Lonsdale in the Chesham Stakes at Royal Ascot, but he has since claimed notable victories at Newbury and Sandown.

John Warren, the Queen’s racing manager, has certainly been impressed by the colt, and he has now confirmed that a run at Doncaster is likely to be his next port of call.

“Reach For The Moon is in really good form,” Warren said. “He’s got an entry in the Champagne Stakes next week, so I think we’ll be looking strongly at that to see whether or not that’s where he ought to go next.”

Hannon says Snow Lantern has “nothing to lose” 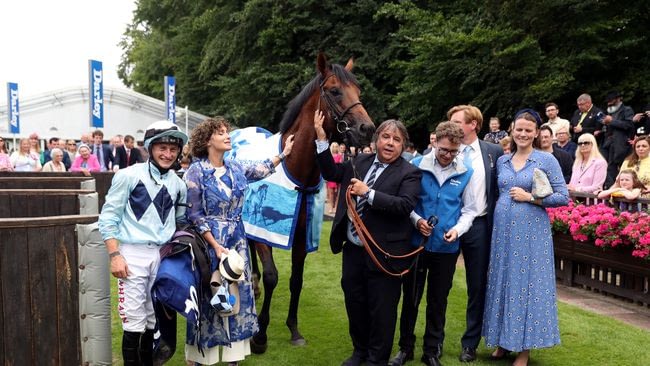