England’s players react to a flare being launched onto the field
The Hungarian Football Federation have vowed to “severely punish” supporters who disrupted Hungary’s World Cup qualifier with England on Thursday.

But in an official statement, the governing body steered cleared of addressing the alleged racist abuse aimed at England’s players.

England’s 4-0 win at the Puskas Arena was overshadowed by the behaviour of certain sections of the home crowd.

Raheem Sterling and Jude Bellingham were allegedly subjected to abuse, and missiles, including a flare, were launched towards the Three Lions’ players during the match.

For their part, world governing body FIFA have promised to act once it receives reports from match officials and delegates who attended the match in Budapest.

The MLSZ made no mention of the racism allegations in their own statement but intend to hand out two-year bans to those who entered the field and hurled objects.

The statement said; “The vast majority of the 60,000 fans present in the Puskas Arena supported the teams in a sporting manner, cheering on the Hungarian national team even when the team was already losing.

“It is in their defence that the minority of disruptive ticket-holders need to be identified and severely punished. Fans entering the field of play, throwing flares and plastic cups are in the process of being identified.

“The MLSZ have already filed or will file police reports against them and will pass on any financial penalties to the perpetrators through civil litigation.

“Furthermore, at the end of proceedings, those found guilty can expect a two-year ban from all sporting events.”

He said: “I am sorry that happened. What I can say is that what I can control, it was respectful. From the players and everybody. What I cannot control is not dependent on me.” 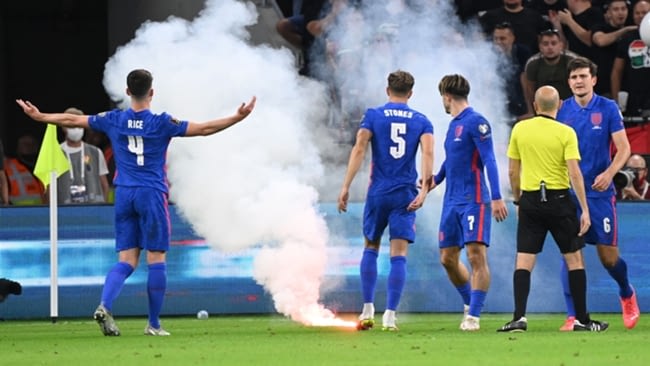