Pernille Harder is encouraged by the increasingly competitive nature of the Women’s Champions League after Chelsea reached the final last season in a campaign where Lyon’s run of titles was ended.

Lyon had been European champions in five successive seasons heading into 2020-21, pipping Harder’s Wolfsburg in 2018 and 2020.

The Denmark superstar was named UEFA Women’s Player of the Year on both occasions and secured a world-record move to Chelsea, where she again made the final.

The Blues came up short, but there was a new name on the trophy as Barcelona claimed their first title after Lyon were knocked out in the last eight.

Harder, speaking on behalf of Heineken, said: “Chelsea, as a team, we want to be one of the big teams in the world, and I think we still are. I think we can develop more from last year.

“Last year, we reached the final, so that’s good, and we have the potential to be even better.

“But I also think the competition is really high. Now, there are so many good teams in Europe, so it will also be even more difficult to reach the final and to win the Champions League.

“I think it’s good that it’s not only one team that is just dominating the women’s football.

“Lyon has been doing that for so many years, but I think now more teams are getting into the competition.

“Obviously, Lyon is still one of the big teams who will compete about the title, but it’s really good that it has developed in this way with more teams being contenders for winning the title.”

Team success is the priority for Harder, despite her individual recognition following Wolfsburg’s final runs.

“The individual [awards] wasn’t a goal for me – it was just the outcome,” she said. “But the ultimate goals are to develop and to develop as a team but also to win titles.

“If that will make me win another individual award, that’s just maybe a result on a good season. But that’s not the main goal for me.”

Heineken is a new sponsor for the Women’s Champions League and Women’s European Championship, which Harder sees as evidence of the sport’s development.

“It’s great that Heineken has chosen to go into women’s football, to the Women’s Champions League and the [Women’s European] Championship that’s coming in the next years,” she said. 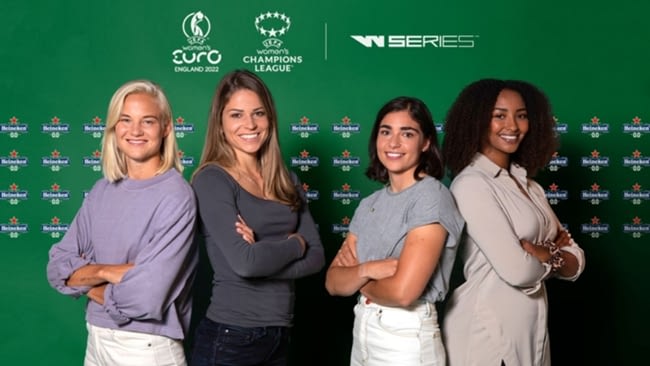