Lewis Hamilton pushes his Mercedes off the track at Zandvoort
Lewis Hamilton knows Mercedes are “on the back foot” after he broke down in practice at the Dutch Grand Prix on Friday.

Hamilton set the pace in the first session at Zandvoort, but lost power after completing just three laps of an FP2 that was halted by a red flag due to Nikita Mazepin going into the Turn 11 gravel.

The seven-time Formula One world champion, who leads Max Verstappen by only three points in the battle for the title, was not overly concerned by the setback as Mercedes investigated the issue.

Asked if he knew what the cause of the problem was, the Brit replied: “Not yet. I was just in there [the garage], I just lost power, so they just told me to stop, but it’s not the end of the world.

“It’s been a beautiful day in terms of weather, it’s amazing to see the crowd – there’s so many people here – it’s good to see people hyped and the first time we’ve see the full, full energy.

“Not full yet, but we’ll probably see it in the next few days – all the energy the Dutch fans bring.

“It’s more annoying that we only got like 20 minutes of running with that red flag. It naturally puts us on the back foot, but Valtteri [Bottas] looked like he had a good session so probably tomorrow we can try and fill in, make up for some of the time, hopefully.”

Charles Leclerc was fastest in the second session, but Verstappen believes he could have been top of the timesheets in his homeland if the red flag had not been waved.

Red Bull driver Verstappen, who was fifth-fastest, said: “I don’t think it looks very representative from our side in the short run. My lap was on a used set, and the lap I had to abort I think would have been good enough for first.

“Already after one lap, the tyres do drop off a bit. Nevertheless, we will work on a few things where we were not entirely happy in the short runs. But long run looks competitive, so that is always very important.” 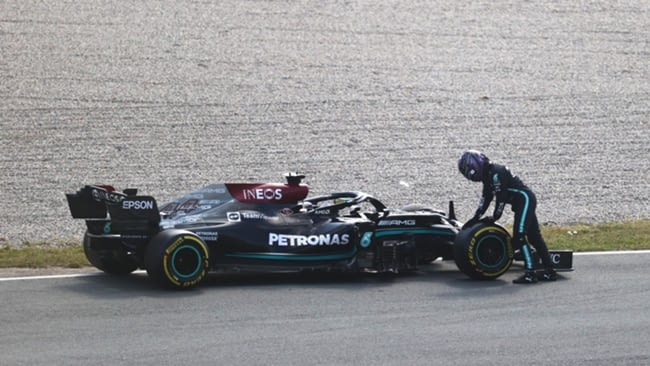