Verstappen won five of the first nine races in 2021 to take control of the title race, only to then earn only five points across the next two races – three of them from sprint qualifying at Silverstone.

It meant Hamilton entered last month’s break with a six-point advantage as he seeks a record-breaking eighth drivers’ championship.

Red Bull regrouped, however, and Verstappen has claimed consecutive wins in Belgium, the country of his birth, and his home nation the Netherlands.

After his pole at the Dutch Grand Prix this weekend, the 23-year-old had complete control of the race at Zandvoort, able to hold off Hamilton and become the first Dutch driver to win at home.

Red Bull again showed greater pace than Mercedes, with Hamilton feeling the gap has widened since the season’s resumption.

“I’m giving it everything. We’re giving it absolutely everything,” Hamilton told a post-race news conference.

“Even since the first race, these guys have just had such a strong car all year. We’re trying as hard as we can.

“We had a couple of races where we looked like we were just about on par with them or just slightly ahead, but there’s only been a couple of those.

“Then they took a big leap, and it’s been difficult. You can’t really overtake in a lot of these places we’ve been to, because we are so closely matched.

“There’s nothing really more I can say – we just have to keep our heads down, keep working, keep pushing.

“We are ahead in the team championship, which is great, but of course we need to pick up some speed if we want to win races in future.”

Verstappen explained this improvement was in response to Hamilton’s performances in Great Britain and Hungary.

“For me, they had pole position at Silverstone, even though of course it didn’t count as pole position, and they were ahead in Hungary, where they definitely had more pace than us,” Verstappen said.

“Of course, Hungary was a crazy race with what happened, with the wet and the start, so I think you shouldn’t look at stats.

“You should look at the realistic pace that there was and not look always at the race result, because I think definitely they would have won Hungary if everything went normal.

“That’s why I really thought in the break, I was like, ‘We really need to speed things up, because otherwise they’re going to run away with it’.

“It’s heading into the right direction, but there are quite a lot of different kind of tracks coming up, so it will definitely swing both ways. We just have to keep on it, keep pushing and keep bringing new bits to the car.”

One area in which Hamilton has noted Red Bull progress all year long is with their Honda power unit, which made Verstappen “a rocket off the start” at Zandvoort.

“They’ve made a big, big step forward this year with their engine,” Hamilton said. “You saw it last year, they weren’t the greatest at starts.

“They’ve improved their power – just the whole power unit’s massively better this year on all aspects for them.

“Naturally, their driveability and their starts… they’re the quickest starters this year, I think, overall. We’ve got some work to do in lots of different areas.”

Hamilton still could have won on Sunday, he felt, but Mercedes would have had to be “perfect”.

“I think today we probably needed everything to be perfect to even have the slightest chance of getting past them through a strategy,” Hamilton said. 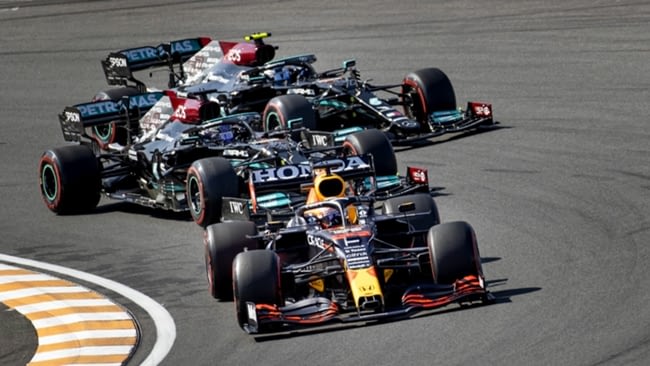