The transfer window was closing when Atletico dashed in to snatch Griezmann, as Saul Niguez’s move to Chelsea cleared space in coach Simeone’s squad for a major arrival.

Griezmann said he was sad not to play regularly in front of a packed Camp Nou during his time at Barcelona, with the pandemic putting paid to that prospect.

That message came in a goodbye note to Barcelona supporters on Wednesday, but on Thursday he had his eye on the challenge ahead.

“Looking forward to coming home,” Griezmann wrote on Twitter, replying after Atletico announced he would inherit Saul’s No8 shirt.

He has joined on an initial loan with a reported obligation to buy for €40million after spending just two years at Camp Nou, with Barcelona having paid €120million to sign Griezmann, one of a string of big-money deals that proved poor value for the Blaugrana’s money.

Griezmann never managed to recapture his best form in Catalonia, but Simeone will have scooped a bargain if the forward’s prime performances return.

WHAT COULD THIS HOMECOMING BRING ATLETICO?

With Barca, Griezmann started 66 games in LaLiga but was substituted off 37 times, with the changes of coach from Ernesto Valverde to Quique Setien and then Ronald Koeman hardly encouraging stability.

During his first stint at Atletico, he started 168 times in the league and was taken off on just 68 occasions, an indication Simeone resoundingly backed his ability.

That faith would stem primarily from the fact only Lionel Messi (176), Cristiano Ronaldo (134 from 2014-18) and Luis Suarez (131) scored more LaLiga goals than Griezmann’s haul of 94 during his five-year stay at Atletico. Before that, he was a regular scorer in LaLiga for Real Sociedad, whom he helped earn promotion in the 2009-10 season.

Yet there was much more to Griezmann’s game in his first Atletico spell than goals, with his hard work meaning he fitted the bill for the club’s taskmaster Argentine coach.

A remarkable 651 ball recoveries in five seasons was the highest total achieved by any forward in the league (Iker Muniain second on 551), but at Barcelona he was only 11th on the list in that department for the combined two years and two months he spent with the Catalan giants.

He was top five for assists (32) among all LaLiga forwards while at Atletico, got his 88 non-penalty league goals from an expected goals (xG) haul of 68.41, showing how clinical he was, while he also ranked in the top three for Opta-defined ‘big chances’ created (56).

His shot conversion rate was a healthy 21.2 per cent, which fell away to 16.9 per cent while at Barcelona, where his lacklustre display against Getafe last weekend suggested it was indeed time to move on.

At Atletico, he is set to team up with Suarez, his former Barcelona team-mate whose acquisition last year proved a stimulus for the Rojiblancos’ title charge.

And in a quirk of fate, Griezmann could make his return to Atletico action back in Barcelona, at Espanyol on September 12.

By scoring for France on Wednesday, albeit fortuitously against Bosnia and Herzegovina, Griezmann was again making a nuisance of himself at a high level, which is where Atletico find themselves after winning LaLiga last term.

And as much as he is “looking forward to coming home”, it remains to be seen whether the scars of an acrimonious exit have healed. 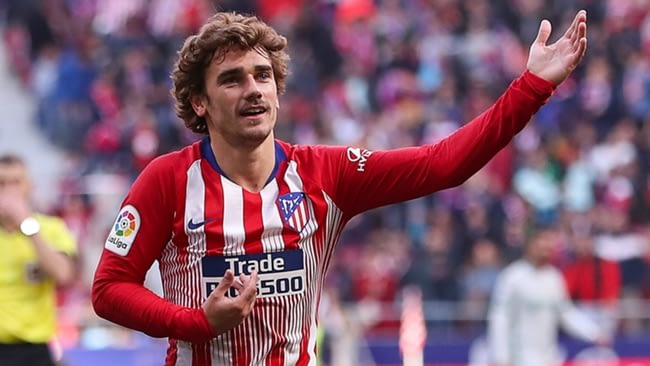