Germany were comfortable victors in Hansi Flick’s first game in charge, and the former Bayern Munich boss was unconcerned by some wasteful finishing.

After a trophy laden spell at Bayern, Flick left the Bavarian giants to take over as Germany boss, with Joachim Low leaving after Euro 2020.

Flick’s team had 30 attempts in total, with seven hitting the target, and controlled 85.3 per cent of the possession.

Not one Liechtenstein player spent more time in Germany’s half than their own, while all of the visitors’ outfielders had average positions within the minnows’ territory.

It nevertheless took some inspiration from youngster Jamal Musiala to unlock the door in the 41st minute, as he teed up Werner, before Sane capped an impressive individual display with a crisp finish late on.

“It took us too long to get our first goal, but it’s a process,” Flick told RTL. “I won’t let this first game ruffle my feathers, there’s a long road ahead and we will make our way down it.

“I told the team before the match that Liechtenstein know how to defend well. We created chances, but our opponent defended really well, with 11 players in their area.

“I can’t fault the team at all, they tried, they put the opponent under pressure, but in the end we did not take our chances enough.

“But I’m positive, we won, and on Sunday we continue against Armenia. We have a long way to go, this was the start and we know where we want to go.”

As well as handing Musiala – who he coached at Bayern – a first international start, Flick also introduced teenager Florian Wirtz for his Germany debut, the Bayer Leverkusen midfielder becoming the third-youngest player to appear for the national team since 1945 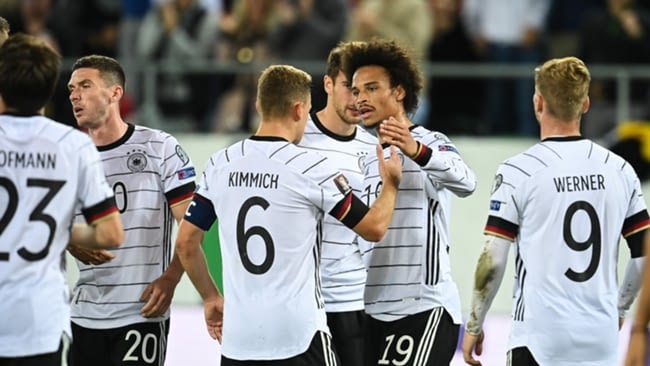