Ansu Fati will take over the famed No10 shirt at Barcelona that has been vacated since Lionel Messi’s move to Paris Saint-Germain.

Messi’s 21-year association with Barcelona came to an end in August when joining PSG on a free transfer after a new deal at Camp Nou could not be agreed.

The six-time Ballon d’Or winner had worn the 10 jersey since Ronaldinho’s departure in 2008 and has become synonymous with the shirt, which was also sported by Rivaldo and Romario in the past.

There had been suggestions Barca would leave the number unoccupied, but it was confirmed on Wednesday that fellow La Masia graduate Fati will inherit it.

Fati has been with the Catalan giants for the past nine years, the last two of those in the first team

The forward became the youngest goalscorer in Barca’s history when he scored against Osasuna in August 2019 aged 16 years and 304 days.

Fati has since added a further 12 goals in 42 appearances across all competitions for the Blaugrana, who he joined at the age of 10.

The Guinea-Bissau-born youngster has been capped four times by Spain and scored his first international goal against Ukraine in September 2020.

Fati, who has been out since tearing the meniscus in his left knee in November 2020, is back in first-team training and could return to action after the international break. 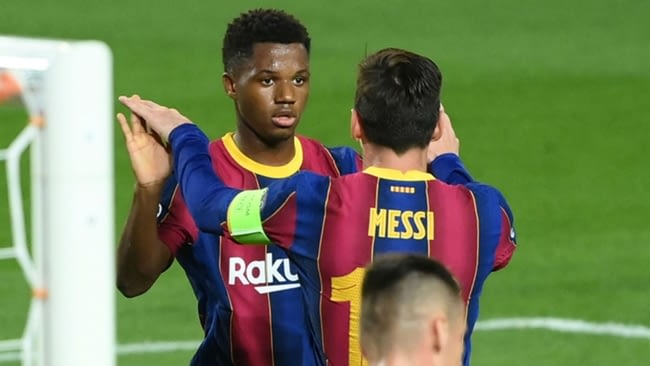