Europe hit the front in the Solheim Cup as the United States were kept in the hunt partly thanks to a dramatic moment involving world number one Nelly Korda.

At the Inverness Club, in Toledo, Ohio, defending champions Europe built a 5.5-2.5 overnight lead after day one, but they might have led by a wider margin were it not for a controversial ruling that cost them a significant hole in an afternoon fourballs clash.

The USA pairing of Korda and Ally Ewing controversially won the par-five 13th hole of their match with an eagle, despite Korda leaving her putt for a three narrowly short of the hole.

Madelene Sagstrom, who was partnering Nanna Koerstz Madsen, picked up Korda’s ball, with Europe happy to give the US team their birdie. However, she pounced before the regulation waiting time, which is allocated to see if a ball close to a hole might drop in, had expired.

Rule 13.3b stipulates that in such a circumstance, “the ball is treated as holed with the previous stroke”. Despite there seeming to be little prospect of Korda’s ball dropping into the hole, the rule was enforced, and the USA went one up in the match thanks to the eagle, with each of the subsequent five holes then halved.

“It was definitely awkward, you don’t want to win a hole like that,” Olympic gold medallist Korda told Golf Channel.

Ryder Cup star Lee Westwood wrote on Twitter: “The rules might have been applied correctly but I’m not sure it falls in line with the spirit of the game.”

Jennifer Kupcho and Lizette Salas also scored a fourballs win for the hosts, beating Carlota Ciganda and Sophia Popov one-up, but Europe won two afternoon matches too to protect the hefty lead they built in the morning foursomes.

Europe earlier made an ideal start, edging three of the four morning foursomes with one-up wins, while the other match was drawn, meaning they held a 3.5-0.5 lead going into the fourballs.

Mel Reid and Maguire fended off sisters Nelly and Jessica Korda, while Nordqvist and Castren won three holes in a row on the back nine on the way to beating Danielle Kang and Austin Ernst.

Cup rookie Maguire said of her win alongside the experienced Reid: “I couldn’t have asked for a better start to my Solheim career. Very lucky to have Mel alongside me. I think everybody had written us off today, and we just sort of took that in our stride and wanted to be as relentless and fearless as possible, and I feel like we did that.”

Charley Hull and Emily Pedersen provided the surge that firmly changed the complexion of the foursomes by going 3-3-4-3 to win three of the final four holes against Thompson and Altomare, turning a two-hole deficit into a win on the 18th.

Celine Boutier and Hall also finished strongly by taking the final two holes against Ally Ewing and Megan Khang to score a half point.

The Nordqvist and Castren combination was the only pairing from either side to return in the afternoon, with further foursomes and fourballs to follow on Sunday, before Monday’s decisive singles matches. 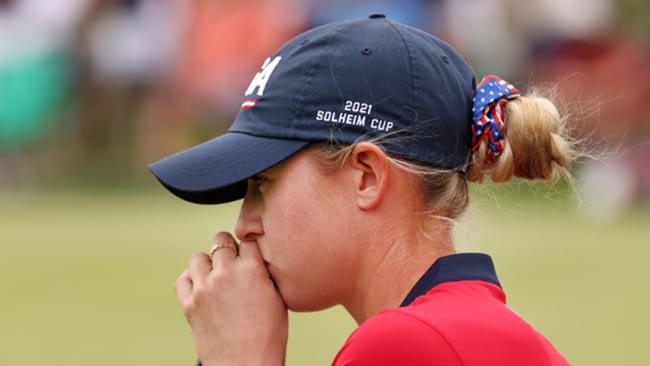