Romelu Lukaku’s double helped Belgium recover from an early setback in Tallinn as they saw off Estonia 5-2 to retain top spot in their World Cup qualifying group.

The Red Devils fell behind for the third time in four Group E matches when Mattias Kait fired the hosts – ranked 110 in the world – into a shock lead inside two minutes at A. Le Coq Arena.

But Belgium, in action for the first time since their Euro 2020 quarter-final loss to Italy, replied before the half-hour mark through a Hans Vanaken header and Lukaku’s clinical finish.

Lukaku doubled his tally early in the second half and further goals followed from Axel Witsel and substitute Thomas Foket as Roberto Martinez’s side made it three wins and a draw from their first four qualifying fixtures, despite Erik Sorga netting a late consolation for Estonia.

Estonia had won their previous three matches and found themselves ahead early on when Kait turned over possession, carried the ball forward and rifled a shot away from Thibaut Courtois.

Belgium soon found their rhythm and were on level terms 20 minutes later thanks to Vanaken, who added to the two goals scored in the 8-0 win over Belarus last time out in qualifying with a headed equaliser from five yards out.

Lukaku then profited from some poor home defending to fire Martinez’s men in front, the prolific striker picking his spot after Karol Mets’ clearance hit team-mate Vladislav Kreida and fell into his path.

Alexis Saelemaekers went close to extending Belgium’s lead with a shot that crashed back off the frame of the goal, but they did not have to wait much longer for their third as Lukaku worked a yard of space and curled the ball past Karl Hein.

Witsel tapped in from close range following some excellent work from Yannick Carrasco, who also played a superb pass over the top for Foket – introduced from the bench 10 minutes earlier – to ghost in behind for Belgium’s fifth.

Another substitute in Sorga pulled one back for Estonia seven minutes from time, but Belgium were already home and dry by that point.

What does it mean? Back to business for Belgium

Belgium’s golden generation of talent missed out on another chance to turn promise into something more tangible at Euro 2020, but they will surely have another shot at silverware in Qatar next year.

The Red Devils have taken 10 points from a possible 12 in Group E and hold a three-point lead over second-placed Czech Republic, who they face next. Wales are seven points worse off but do have two games in hand to play.

They may not have looked quite as commanding as they did in their eight-goal win against Belarus, and Martinez will not be happy with the goals his side conceded, but Belgium showed why they are ranked number one in the world with the way they fought back.

Lukaku scored a trademark goal in each half to ensure Belgium avoided any sort of upset, the Chelsea striker taking his goals tally for his country to 66 in 99 caps.

Those two goals came from four shots in total and he also created two big chances in his 74 minutes on the field.

Vanaken had the ball taken from his feet in the build-up to Estonia’s early opener and perhaps could have done better, but it was a poor pass to him from Saelemaekers.

Indeed, makeshift wing-back Saelemaekers gave away the ball 13 times before being replaced by Foket, who made an almost instant impact with his first senior international goal.

Both sides face a quick turnaround in matches as they are back in action on Sunday. Belgium host the Czech Republic in their next Group E match, while Estonia face Northern Ireland in a friendly. 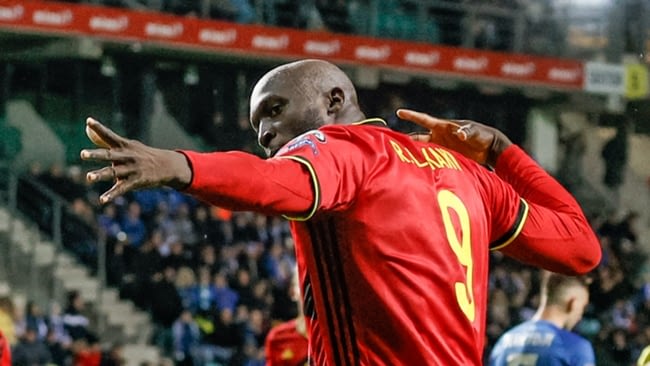