England celebrate Raheem Sterling’s strike
England’s big win in Hungary was even more remarkable because of the racist abuse directed at their players, according to Kick It Out head of development Troy Townsend.

A 4-0 World Cup qualifying success on Thursday was overshadowed by reports of monkey chanting in Budapest.

On Friday, Townsend hailed Three Lions manager Gareth Southgate and the “support system” around 18-year-old Jude Bellingham, one of the apparent victims. Bellingham said on Twitter the abuse was “part of the game and always will be until proper punishments are put in place by those with the power”.

This sort of response has prompted widespread praise as England players have time and again taken a stand against discrimination. FIFA has opened disciplinary proceedings against Hungary, after receiving official reports of events at the Puskas Arena.

Townsend suggested racist chanting was “what we’ve come to expect” and the team would have thought likewise heading into Thursday’s match, but he was again enthused by the players’ reactions.

Raheem Sterling was surrounded by his team-mates as he celebrated the opening goal with a tribute to his late friend Steffie Gregg.

Objects were thrown at Sterling by a number of Hungary supporters, but England players including Declan Rice and Jack Grealish appeared to mock their actions by drinking from cups that landed at pitchside.

“In general, they dealt with it with class,” Townsend told Stats Perform.

“Every goal, there’s more meaning to it, isn’t there? You see the ball go in the back of the net and you think, ‘I’m disappointed with four’. I’m like, ‘Oh, go and get five, go and get six’.

“But those players, I can’t say this enough now about players who have been victimised and the support that they have of their team-mates.

“I would imagine that there will be certain elements of that squad last night that were expecting it.

“And when they targeted Raheem, who lost a close friend and that’s what the inscription on his T-shirt was about, to his close friend… he’s in a moment where he’s paying homage to a friend, while having cups thrown at him and potentially hearing the monkey chants as well, this is what I mean about that mindset of our professionals.

“Now, they’ve got such a strong and positive mindset that they won’t let those situations affect them. 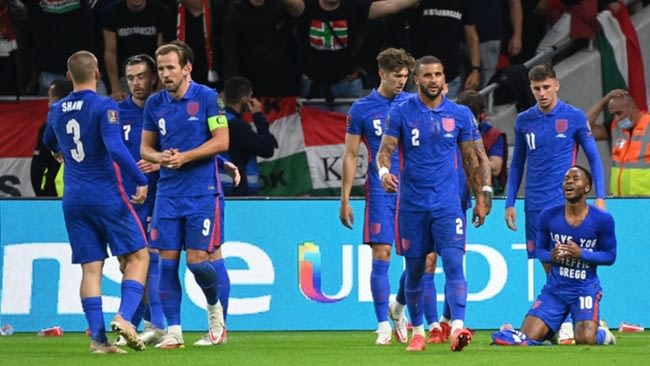