Joel Embiid #21 and Ben Simmons #25 of the Philadelphia 76ers warm up before playing against the Washington Wizards during Game Five of the Eastern Conference first round series at Wells Fargo Center
Joel Embiid has taken to social media to deny a reported rift between him and Philadelphia 76ers team-mate Ben Simmons who has been linked with a trade away from the franchise.

The 76ers topped the Eastern Conference with a 49-23 record across the 2020-21 season but crashed out of the playoffs to the Atlanta Hawks 4-3 in the Conference semi-finals.

Simmons was widely criticized for his role in the 76ers’ early demise, struggling from the free-throw line in the playoffs, leading to speculation about his future.

That speculation has intensified in the off-season, with reports of a rift between Embiid and Simmons suggesting that the franchise needed to let one depart.

“He’s an amazing player and we all didn’t get the job done. It’s on me personally. I hope everyone is back cuz we know we’re good enough to win.”

Embiid’s tweet was in relation to a report from USA Today that the ‘rift had been escalating’.

He added: “From my own experience, y’all have no idea how much this media makes up stuff for followers and shame on you for believing them.”

The 27-year-old Cameroonian also tweeted about his displeasure at the 76ers’ fans treatment of Simmons, who skipped the 2020 Tokyo Olympics to continue to develop his game this off-season.

“I haven’t forgotten but 2 years ago, I got booed, people in Philly wanted me to be traded. I even shushed them,” Embiid tweeted.

“Only the real ones didn’t but I just put the work in that offseason to be better cuz I knew I wasn’t playing up to my potential. Philly fans, y’all also gotta be better.

“For clarity, I love the criticism, I love when I’m told I can’t do something. It makes me work harder to prove everyone wrong but not everyone is built like that.”

For clarity, I love the criticism, I love when I’m told I can’t do something. It makes me work harder to prove everyone wrong but not everyone is built like that. 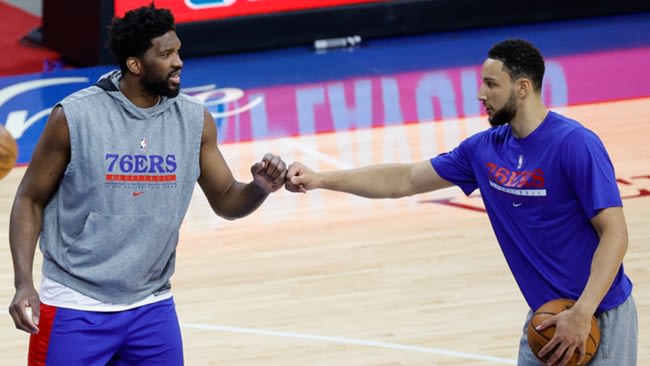