France head coach Didier Deschamps has opened up about the decision to let Kylian Mbappe return to Paris Saint-Germain after sustaining a minor injury.

Mbappe was taken off in the closing stages of Les Blues’ 1-1 World Cup qualifying draw with Bosnia-Herzegovina on Wednesday with a calf problem.

The French Football Federation announced on Thursday that Mbappe had been granted permission to leave the camp ahead of the games with Ukraine on Saturday and Finland on Tuesday.

The 22-year-old’s injury is not considered serious, but Deschamps was not willing to take any risks by using the prolific forward in France’s next two matches.

“I’ll be clear about this. Kylian felt something late in the game,” Deschamps said at a news conference on Friday.

“We have done all the tests. The recovery period is very short and a muscle problem was ruled out, but an issue persists.

“It is an injury he had with his club in May. He felt the same pain and missed the second leg against Manchester City in the Champions League.

“I felt there was no possibility he could be used before Tuesday so didn’t see the point in keeping him.”

Despite fielding Mbappe in a front three with Antoine Griezmann and Karim Benzema, France were held by Bosnia-Herzegovina in Wednesday’s Group D clash.

That was Les Blues’ first match since exiting Euro 2020 at the hands of Switzerland in the last-16 stage, but Deschamps is not worried about his side’s form ahead of facing Ukraine in Kiev.

“I have enough experience to know how the qualifiers work,” Deschamps said. “The result against Bosnia was not what we wanted, but we are in the best possible place. I am calm and serene.”

France are top of their group, four points better off than second-placed Ukraine, who have drawn all four matches.

“With four matches to play, Ukraine are behind us in the table. A win would consolidate our position, but the Ukrainians also want to win,” Deschamps added.

“We’ll go into the match with the same intentions as we did against Bosnia. Every match is important and tomorrow’s in particular.” 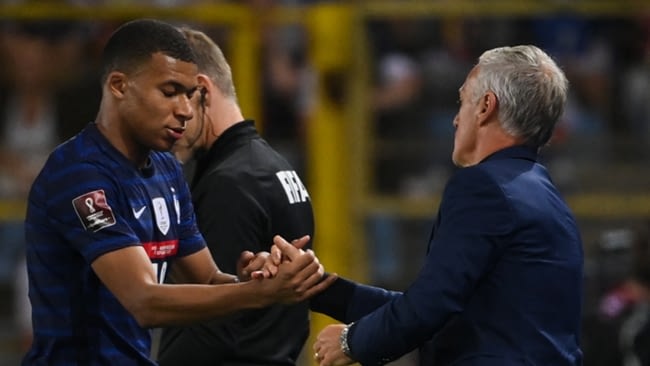