France head coach Didier Deschamps acknowledged there is “significant room for improvement” with his attacking trio of Antoine Griezmann, Karim Benzema and Kylian Mbappe while the latter suffered a reported calf concern.

Deschamps deployed the star trio together for the seventh straight game but lacked genuine attacking cohesion as Les Bleus drew 1-1 with Bosnia-Herzegovina in Strasbourg.

The France boss has persisted with the trio since Benzema’s return to the national team fold, yet Les Bleus are winless in their past four games.

Griezmann equalised in the 39th minute after Edin Dzeko’s opener but France were forced to play for most of the second half with 10 men after Jules Kounde’s red card.

Mbappe crashed his only shot for the game off the near post in the 27th minute, while Griezmann’s goal came with fortune after Dzeko headed a corner into his back and over the line.

Benzema’s only shot on target was a tame deflected effort that was easily held by Bosnia goalkeeper Ibrahim Sehic.

“There were good things, there were sequences and individual actions,” Deschamps said after the game.

“The opponents make sure to bring in a lot of people, to reduce spaces. We created chances in the first half. There are situations that could have been better handled as well.

“The room for improvement in offensive efficiency is significant, particularly with the individual quality of these three players.

“I have others on the bench. I have made changes to boost this area.”

Real Madrid target Mbappe was replaced in second-half stoppage time by Moussa Diaby with RMC reporting a calf issue, although the severity is unknown at this stage.

The world champions remain top of Group D in World Cup qualifying with eight points from four games despite the draw, with second-placed Ukraine drawing 2-2 in Kazakhstan.

“We knew that [result] before and it proves that the qualifying phases are complicated,” Deschamps said.

“I will not hide that we must be satisfied with this draw even if it was not what we had planned. Considering the scenario, it was complicated when we were reduced to 10.

“We have one more point and there are others to pick up on Saturday in Kiev. It happens very quickly. I have no regrets in the sense that the intentions were there.”

Les Bleus return to action on Saturday away to Ukraine in Kiev, before a third qualifier in the break against Finland. 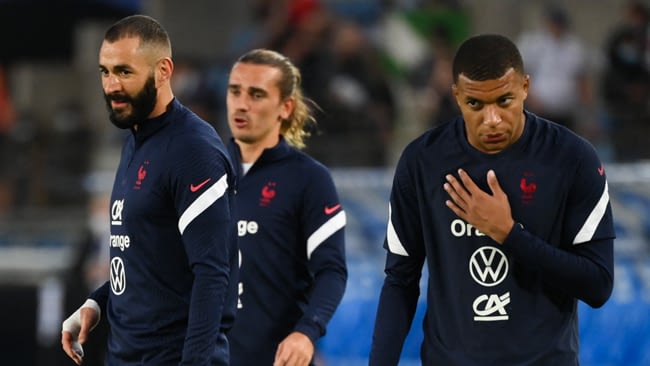