The US Open was mounting a clean-up and safety check operation on Thursday after being affected by a deadly storm that struck New York City.

There would be no play before 12:00 local time (16:00 GMT), an hour later than matches usually get under way, and spectators were told they would not be allowed into the grounds until 11:00 at the earliest.

Severe weather hit New York and New Jersey on Wednesday, with the tail-end of Hurricane Ida striking the area and causing at least nine deaths.

Eight of those deaths recorded in New York resulted from basements flooding, the New York Post reported, with the flash flooding causing chaos in large parts of the city. At one point, 3.15 inches of rain fell in an hour, a record for the Big Apple.

Tournament organisers were carrying out inspections to determine whether safety of visitors to the Flushing Meadows grounds could be assured.

The US Open said in a statement: “We appreciate your patience as we evaluate the readiness of our site. The safety of our fans, players and staff is of the utmost importance.

“We will be issuing an update to the schedule including gate opening and match start times. The current plan will not open gates before 11:00 am.”

The storms were so unusually powerful on Wednesday that the late-night match between Kevin Anderson and Diego Schwartzman on the covered Louis Armstrong Stadium was affected by rain, with water gusting in through openings despite the protection.

It was moved to Arthur Ashe Stadium to be completed, with its original court left drenched.

Transport in New York early on Thursday was proving problematic, with the Metropolitan Transportation Authority, responsible for the local bus and subway system, announcing an “extremely limited” service and urging customers to “stay home if you can”.

Ash Barty and Novak Djokovic, along with Olympic champions Alexander Zverev and Belinda Bencic, are among those due in action on Thursday. 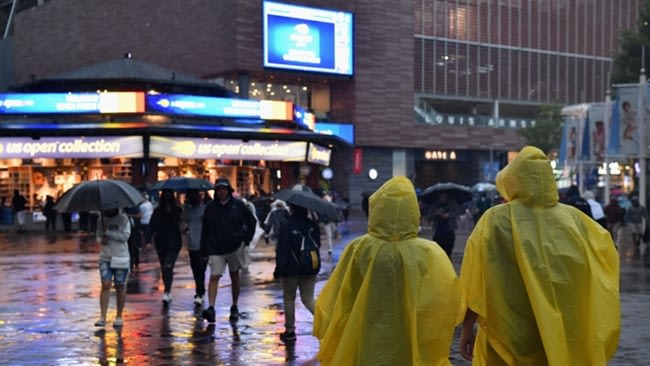