Luuk de Jong and Ronald Koeman when they worked together with the Netherlands
New Barcelona striker Luuk de Jong accepts he is “different” to the club’s usual style of striker but pointed out Ronald Koeman knows how to utilise him.

De Jong joined Barca on loan from Sevilla at the end of the transfer window with the Dutchman seen by most as a curious option in many senses.

He had been linked with a potential return to former club PSV and was shunted down to third choice at Sevilla following the signing of Rafa Mir from Wolves.

But late on deadline day, cash-strapped Barca allowed Antoine Griezmann to depart for Atletico Madrid and the Blaugrana replaced the Frenchman with De Jong on a temporary deal for 2021-22.

It is a signing that many Barca fans will have deemed underwhelming given De Jong hardly sparkled previously in LaLiga with Sevilla and his skillset is not one that necessarily lends itself to the club’s traditional philosophy of short, sharp passing and fluid, possession-based football.

Indeed, De Jong acknowledged he brings qualities that are seemingly at odds with Barca’s past.

“I am tall, I am a good header of the ball,” he told Barca TV upon his arrival. “As I already said before, I am a player with a different skillset.”

De Jong played under Koeman for the Dutch national team, meaning the coach should feel confident about how to get the best out of his abilities.

“Koeman knows that he can use me in the final minutes when he needs a player that’s tall and good with his head,” he continued.

“That’s the kind of player I am. [But] as I showed in Sevilla, I also have other aspects to my game.”

Given the cultural significance of the style of play implemented at Barca, De Jong outlining his strengths suit a direct style of play may not go down too well with certain sections of supporters.

But there is no doubt such a brand of football is likely to ensure De Jong brings more to the table at Camp Nou – after all, he averaged 1.1 headed shots per 90 minutes in LaLiga last term, a figure bettered by only four strikers (minimum 900 minutes played).

What makes that figure slightly more impressive is the fact Sevilla would not be considered a ‘direct’ team. According to Opta data, Julen Lopetegui’s men only recorded 35 ‘direct attacks’ last season, the second-fewest in the division, whereas Barcelona’s 67 was the third-highest.

A direct attack is defined as a sequence that begins just inside the team’s own half and has at least 50 per cent of movement towards the opposition’s goal and ends with a shot or touch in the box, so while that does not necessarily mean Barca smash long balls to the front man constantly, it does suggest Koeman’s setup will provide De Jong with chances to be useful.

His first such opportunities could even come against Sevilla this weekend. 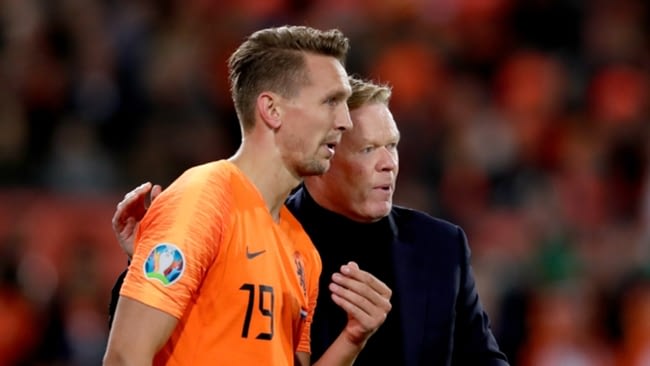