Prescott’s 2020 season ended in Week 5 with a fracture-dislocation of his right ankle and the Cowboys star has been stepping up his comeback ahead of the September 9 trip to Tom Brady’s Buccaneers.

“I’m definitely ready. I’m excited,” Prescott told reporters. “I put in a lot of work to get to this point.

“Whether it was months ago, rehabbing the ankle, to the last few [weeks] keeping the feet working while I was letting my arm rest.

“There is so much work I put into this I’m just excited to go out there and be a part of the full game. Just being out there with my brothers and being able to do something I love.”

Since taking the starting role as a rookie in 2016 from an injured Tony Romo, Prescott has thrown for 17,634 yards with 106 touchdowns and 40 interceptions.

“I’m definitely ready. I’m excited. I put in a lot of work to get to this point.”

Dak Prescott is excited & ready to get out on the field against Tampa Bay.

The 28-year-old Prescott has also rushed for 1,314 yards and a further 24 touchdowns.

Though he missed most of last season, Prescott is 10th among qualifying quarterbacks in yards per attempt (7.69) and 12th in passing plays of 25 yards or more since 2016.

“I think we went about this process the right way that part of it was protecting me from myself,” Prescott said. “I mean, the moment I got into any team reps, I wasn’t dialling anything down. I wasn’t trying to throw a certain amount of percentage.

“I think that’s just the way I play the game, I just went out there and playing within the moment, ripping passes, not thinking about it, just making the plays I needed to make. Then after two days like that realising there wasn’t any residual effect and I wasn’t sore.

“I’ve been sticking to the plan and it’s all worked out. Yeah, from the shoulder to the leg to my mind, I’m ready to go.”

Cowboys head coach Mike McCarthy added: “You’ve got to give him credit for the process that he worked himself through. It isn’t like he just stood in the back and didn’t do anything while he wasn’t throwing.

“He’s staying on top of the footwork. His conditioning couldn’t be better. All the extra work that all these guys put into it, Dak took advantage of that time.” 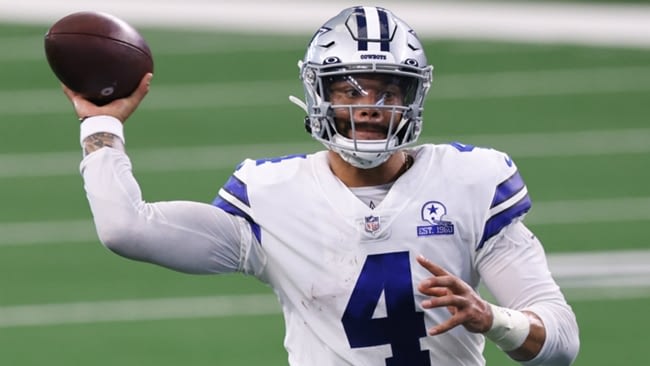