Everton Ribeiro came off the bench and scored the winning goal in the 64th minute as Brazil made it seven wins from seven games on the road to Qatar 2022.

Brazil – back in action for the first time since their Copa America final loss to La Albiceleste in July – are six points clear of Argentina atop the standings ahead of Sunday’s mouth-watering showdown in Sao Paulo.

Chile, meanwhile, are seventh in the 10-team qualifying section in South America, three points adrift of the play-off position.

0 – Brazil have never lost a game under Tite when they have scored the opener. Safe.

Weverton started for Brazil in the absence of stars Alisson and Ederson and he was the busier of the keepers in Santiago, where the two nations met for the first time since the Selecao beat Chile at the Copa.

Arturo Vidal was in the thick of the action for Chile amid a strong start to the season with Inter – the star midfielder forcing a double-save from Weverton with a tricky free-kick on the half-hour mark and the latter reacted quickly to deny Eduardo Vargas’ close-round rebound.

Gabriel ‘Gabigol’ Barbosa had earlier shown a great burst of pace to surge clear on the counter-attack, sliding the ball to an unmarked Neymar but the Paris Saint-Germain forward sent his shot high into the stands.

Vidal then forced Weverton into another save before half-time, though clear-cut chances were few and far between after 45 minutes.

The game came to life in the second half when Brazil broke the deadlock against the run of play in the 64th minute.

Chile had largely controlled proceedings, but Ribeiro and Neymar combined just past the hour mark – the latter’s close-range attempt kept out by Claudio Bravo but the former was on hand to convert the rebound.

Chile continued to move forward in search of an equaliser but they were unsuccessful as Brazil kept their fifth consecutive clean sheet in qualifying and sixth in total.

What does it mean? Tite’s men stay hot

There is no stopping Brazil on their path to next year’s World Cup. The Selecao have won all of their qualifiers so far and have never lost a game under head coach Tite when scoring first.

With so many absentees, Ribeiro was the hero off the bench for Brazil. The Flamengo star made his international debut in 2014, but both of his international goals have come this year, within three months since June.

The two-time Copa America champions have only won one of their seven qualifying fixtures so far, against Peru in November. Pressure is growing on Chile boss Martin Lasarte.

Brazil and Argentina will renew their rivalry in Sunday’s top-of-the-table encounter, while Chile visit Ecuador on the same day. 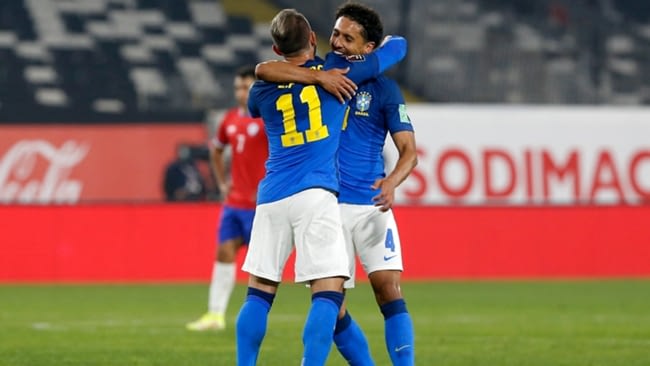