Cantlay carded a four-under-par 66 to be one stroke clear of world number one Rahm at the halfway stage of the final FedEx Cup play-off event on Friday.

FedEx Cup leader Cantlay arrived at East Lake with a two-shot cushion at 10 under – as part of the new format, having claimed a thrilling six-hole play-off victory at the expense of Bryson DeChambeau last week.

Cantlay – the only winner of three PGA Tour titles this season – preserved that advantage following Thursday’s opening round and the American golfer managed to stay atop the leaderboard at 17 under as Rahm continued his charge in Atlanta, Georgia.

While Cantlay produced a flawless performance heading into the weekend, FedEx Cup hopeful Rahm – fourth in the standings prior to this week’s lucrative tournament – kept the pressure on with back-to-back 65s.

After a bogey-free front nine which featured one birdie, Rahm lit up the back nine with five birdies, including three in a row to close out the day.

There is distance between the top two and the rest of the 30-man field, with 2020 U.S. Open champion DeChambeau 11 under through 36 holes following his three-under-par 67.

Third in the standings and three strokes behind at the start of the Tour Championship, DeChambeau mixed five birdies with two bogeys to be six shots off the pace, one stroke better off than 2017 FedEx Cup champion Justin Thomas (67).

Tony Finau (67), Kevin Na (67), Viktor Hovland (68), Cameron Smith (68) and Harris English (69) are nine under, while two-time FedEx Cup and Tour Championship winner Rory McIlroy is a shot further back after shooting a 66.

McIlroy battled to turn things around on day two – the four-time major champion reeling off three consecutive birdies to close out the round after a red-hot back nine, which included six birdies in total.

“I thought the pins today were pretty tricky because all of them were, even if you hit the ball close – I hit a few wedge shots to like four, five feet – and you still had big breaking putts or if you’re on the wrong side of the hole, it’s still tricky,” McIlroy said after recording two bogeys and a birdie from his first nine holes.

“But to be two over through four and play the last 14 in six under was a really good effort to at least just keep myself in the tournament.”

Jordan Spieth (67) also reached eight under as the former world number one revealed he and his wife Annie are expecting their first child in November.

“It’s something you can’t hide now that we are close,” Spieth said. “It’s been a really great year. I’ve been blessed on a lot of fronts. … So it should be an exciting fall.” 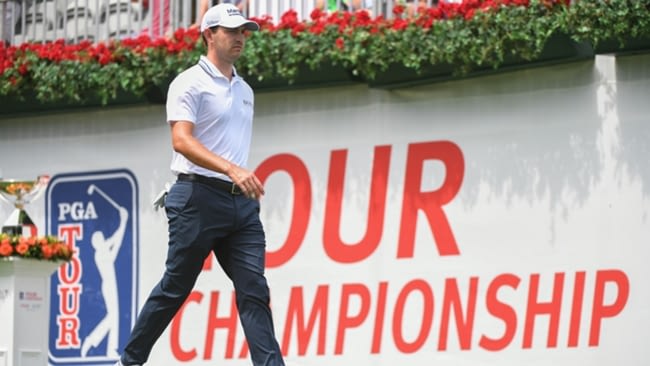