FedEx Cup leader Patrick Cantlay remains in the box seat after extending his lead at the Tour Championship to two shots after the third day in Georgia on Saturday.

Cantlay, who started the week at 10-under par as part of the new format, birdied the 18th hole to finish with a three-under round of 67 to be 20-under at East Lake Golf Club.

The 29-year-old American moved two shots clear of 2021 U.S. Open champion Jon Rahm, who had one bogey and three birdies in his round of two-under-68.

Cantlay had a dramatic round, after making three birdies on his front nine to move four strokes ahead, before he stumbled with three bogeys in six holes on his back nine, around three more birdies.

The BMW Championship winner holed a 23-foot putt on the 18th for birdie to restore the lead he held at the start of the week.

“I thought it was big for momentum,” Cantlay told reporters after his birdie on the 18th. “It was a nice putt to make, especially being out of position on that hole. I’ll take that momentum into tomorrow.”

Cantlay is the only player to win three titles during the 2020-21 PGA Tour and remained confident he could close out the victory despite the inflated magnitude of what is at stake, with $15million prize money for the FedEx Cup Playoffs winner.

“The internal drive to win golf tournaments is really what drives me, and so the external factors are not as much of a factor for me,” he said.

“I’m going to feel similar to how I feel most any Sunday when I’m coming down the stretch for a golf tournament because my drive to win is strong inside me. The other stuff is just a consequence of that. I don’t play the game to make money. I play the game because I want to win golf tournaments.”

Americans Justin Thomas and Kevin Na are next best at 15 under and 13 under respectively, ahead of Abraham Ancer and Billy Horschel at 10 under.

Thomas and Ancer both carded top rounds of five-under-65 on Saturday to move up the standings, while world number seven Bryson DeChambeau is nine under after a two-over-72.

Thomas would have recorded his first career bogey-free round at East Lake, if he had not missed a six-foot putt for par on the 18th.

World number two and reigning Tour Championship winner Dustin Johnson moved up to eight under with a two-under-68.

Tokyo Olympics gold medalist Xander Schauffele carded three under to also be eight under, alongside Jordan Spieth and Johnson. 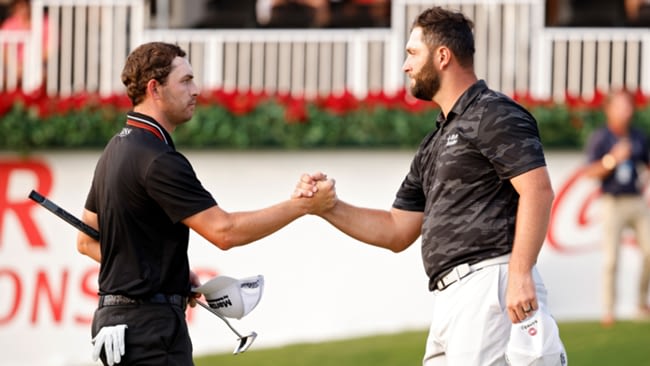