Barcelona have finally managed to offload Miralem Pjanic as the Bosnia-Herzegovina international joined Besiktas on loan after one poor season in LaLiga.

Pjanic arrived at Camp Nou in 2020 for a reported initial fee of €60million in a peculiar swap deal that saw Arthur go the other way to Juventus for an estimated €72m.

While most saw the exchange as bizarre on Barca’s part, even with Arthur becoming an unpopular figure among supporters, football finance experts at the time outlined that the deal would potentially benefit both clubs in terms of their accounting.

But ultimately that proved to be about as far as the positives went for Barca, as Pjanic failed to convince and fell behind youth player Ilaix Moriba in the pecking order in the second half of 2020-21.

Pjanic played 30 games across all competitions but only 13 were starts, with just four of those coming after the turn of the year as Ronald Koeman’s lack of faith became ever clearer.

He did not score or assist a single goal all season, making him the only outfield player who played at least 170 minutes for the club last term to not have one goal involvement.

Barca were open about their willingness to offload Pjanic in the close-season, particularly in their face of crippling debts that have surpassed €1.3billion and led to significant player departures in the past few months.

He was only named on the bench for one of Barca’s first three league games this term, with youngster Gavi and Nico Gonzalez the latest academy products to move ahead of Pjanic.

Barca’s brief statement to confirm the deal did not even wish the player luck in his next chapter, perhaps highlighting the ill-feeling surrounding him after a disappointing season.

The statement read: “Barcelona and Besiktas have reached an agreement for the loan of the player Miralem Pjanic until June 30, 2022.

“Pjanic arrived at the Camp Nou last summer from Juventus, where he had been since 2016. The Bosnian international has made 30 appearances for FC Barcelona.” 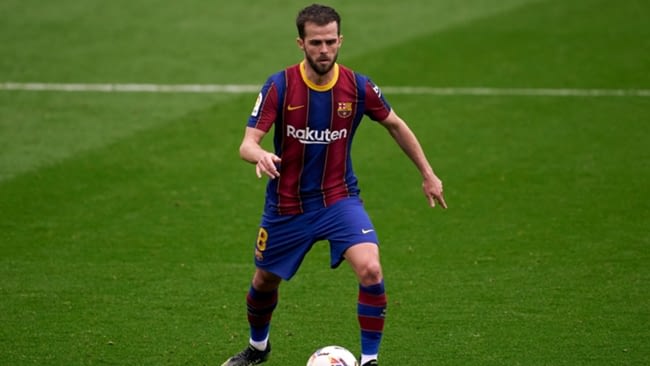